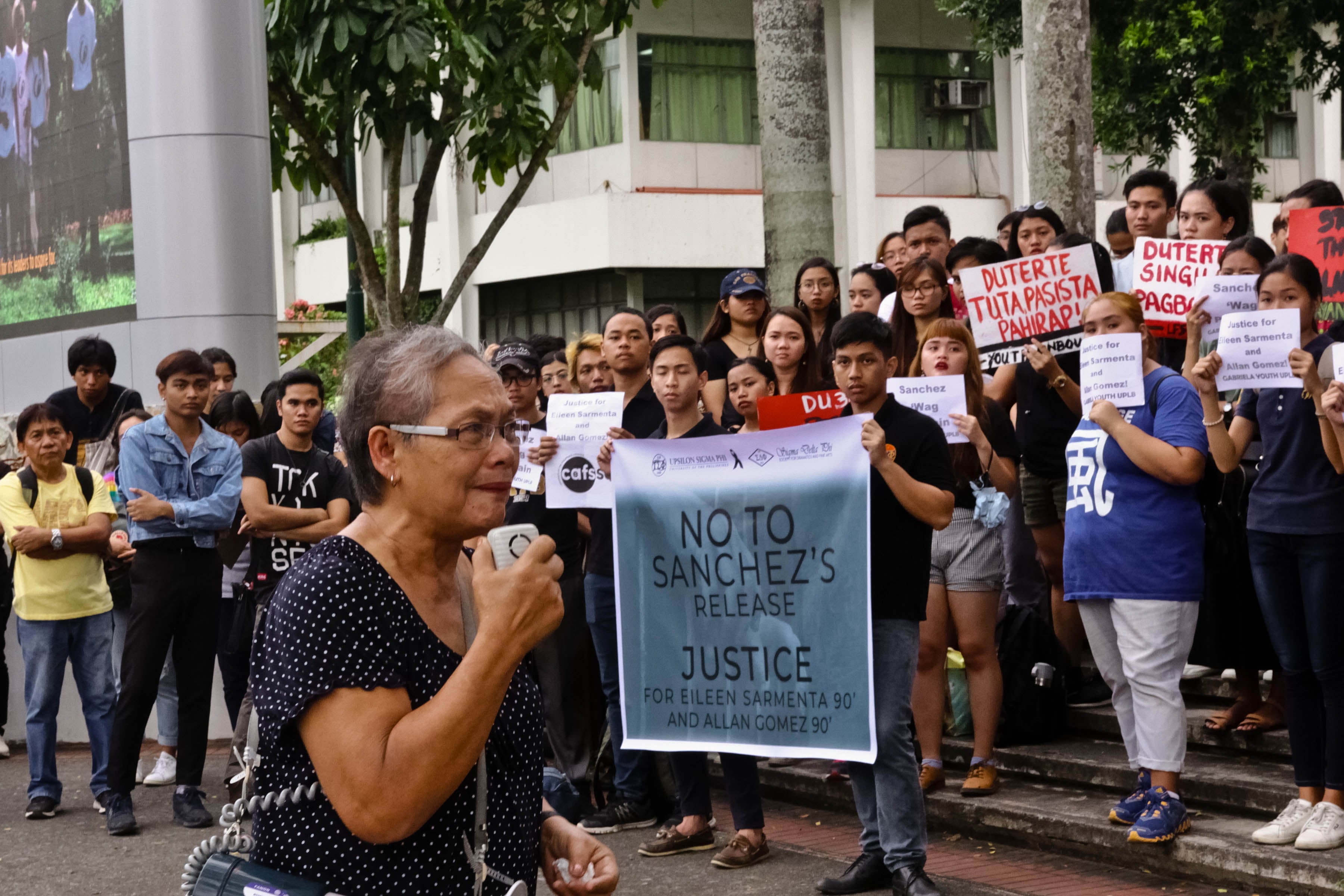 Rape-slay convict Antonio Sanchez may not walk free any time soon after all, and is not likely to do so, until he has served his full 40-year prison term, according to justice department officials amid public outrage over reports that the former mayor might be released early due to his “good conduct.”

The former mayor of Calauan, Laguna province, and six of his aides were each sentenced to serve seven 40-year prison terms for the rape-murder of Eileen Sarmenta and for the murder of Allan Gomez, both University of the Philippines Los Baños (UPLB) students in 1993.

Under the Penal Code, no person should be imprisoned for more than 40 years even if convicted in multiple cases.

The family of Gomez clarified that the two students were not college sweethearts but were just close to each other, saying his fraternity was affiliated with Sarmenta’s sorority.

Guevarra said prisoners convicted of heinous crimes and those who have committed drug offenses while incarcerated should be excluded outright from benefiting from Republic Act No. 10592, which shaves years off a prisoner’s prison term for good behavior.

He said he had told Faeldon to conduct a “process of elimination” of prisoners not qualified for GCTA because the law excluded “recidivists, habitual delinquents, escapees and persons charged with heinous crimes.”

“I have given instructions to the BuCor chief that the review of GCTA for high-profile or heinous crimes be conducted with a lot of care, caution and circumspection,” Guevarra said.

“If a person is charged with heinous crime, not qualified at all,” he said.

He noted that Sanchez was found in possession of a sachet of “shabu”(crystal meth) and a bag of marijuana leaves in his cell in 2006.

In 2010, prison guards confiscated P1.5 million worth of shabu stashed in one of the former mayor’s Virgin Mary statues and in 2015, he was found illegally keeping appliances in his cell.

Drug possession alone, Guevarra said, “is not (a mere) infraction; that is a crime.”

“I am surmising the guidelines of the BuCor would make that person ineligible already,” he said.

Faeldon agreed with Guevarra, noting that based on a preliminary assessment, Sanchez had committed “many violations” since he walked into the New Bilibid Prison in Muntinlupa after his conviction on March 14, 1995.

“He has many involvements in some not good behavior that maybe would disqualify him. That’s really the probability,” the BuCor chief told reporters.

“He may not be qualified to go home today or in the next few months. … It may take him several years,” he added.

Faeldon said the 2006 drug charges were dropped by the Muntinlupa court in 2011, but the dismissal would have no bearing on the BuCor’s review of Sanchez’s conduct.

“As far as the [BuCor] is concerned, his arrest was legal and he committed a violation of the prison rules,” he said.

The shabu discovered in his cell in 2010 and the appliances seized in 2015 were “clear antithesis of what good behavior should be,” Faeldon said. “These will be points to be raised against him to be qualified for the application of the good conduct time allowance.”

He said the period of incarceration of around 11,000 prisoners across the country would be recomputed for GCTA, but he estimated that only around 1,000 would qualify for reduced sentence.

Among those who would be disqualified were “high-profile” inmates, as well as drug lords and those who “provided sanctuary or supported drug peddlers while they were here,” he said.

To quash rumors that Sanchez had already been released and was seen in his hometown, journalists were allowed to take photos of the 73-year-old walking inside the maximum security compound.

BuCor spokesperson Eusebio del Rosario Jr. said Sanchez was doing fine inside his cell but had complained of cataract.

“He’s usually holed up in his cell, praying and kneeling before his Virgin Mary statue,” Del Rosario said.

Sarmenta’s mother, Maria Clara, who was shocked and angered by the prospect that Sanchez might soon walk out of prison, was thankful for the justice department’s clarifications.

“God is not sleeping. And we have complete trust and faith in the law,” she told the Inquirer.

She was indignant, however, over the former mayor’s prison lifestyle and suspected that some of the prison authorities could have been bribed to say that he showed “good conduct.”

“His lifestyle there shows that he lives like a king—he has aircon, TV, carpeted floor, two bedrooms and more than a million [pesos worth of] shabu in his possession. Aren’t those infractions? Show us proof that he behaved well in jail,” Sarmenta said.

“Did money talk so evaluators could vouch for his ‘good conduct’ in prison? Or is it a matter of whom you know in government? We can’t help thinking,” she said.

Even after 26 years since her daughter and her friend were brutalized, she still could not bear seeing the face of Sanchez, she said.

“After the promulgation I don’t want to see his face, not even in picture or in television. Now, whenever I see his face on TV, I want to throw something at it or shut it off,” she said.

The 74-year-old retired staff member of the House of Representatives lives with her husband and a grandson in their home in Las Piñas City.

She said that while the family was looking at courses of action, they wanted the government to be transparent.

“The law is the law. You cannot oppose the law but we just want it to be fair,” she said.

At UP Los Baños on Thursday, Gomez’s 73-year-old mother, Iluminada, and her eldest son, OJ, joined around 200 students and teachers protesting the early release of Sanchez.

Carrying banners saying “No to release of Sanchez,” they carried lighted candles while marching around the sprawling campus.

Gomez told the Inquirer that releasing Sanchez would only put to waste the years spent on getting a conviction against an official who was also allegedly involved in other illegal activities in Calauan.

“Only our case had brought the end (to Sanchez), hopefully, and the awakening, hopefully. But people have short memory, no?” she said.

“Here came an event (Allan’s murder) that although painful had awakened people. We thought it would continue, but it did not simply because our government system is not protecting our people,” she said.

The retired UPLB professor’s family was still keeping the Tamaraw FX van that her son and Sarmenta had used on the night they were abducted by Sanchez’s men in June 1993.

The young Gomez, who would have been 45 this year, was in his senior year as an agriculture student at the state university and had promised to buy his mother a farm that is now only a picture she has been keeping all these years.

The law that would allow prisoners to be released earlier than their prison term has good intentions, she said.

“But people have to understand that what’s shocking is [this could be] a political ploy,” she said, without elaborating.