Locsin: Ex-mayor deserves to die in his cell 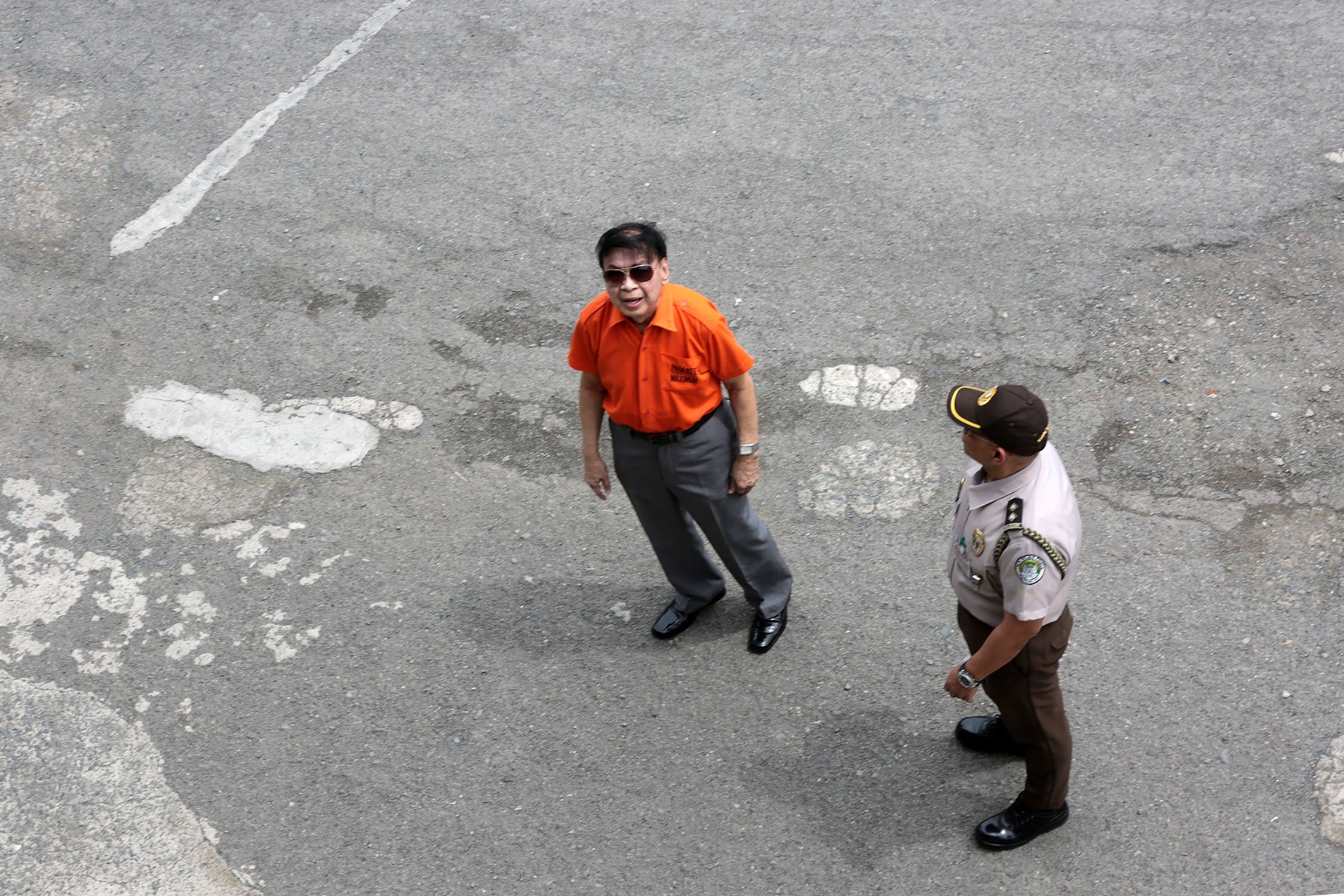 ALL DRESSED UP BUT NOWHERE TO GO Antonio Sanchez, former mayor of Calauan, Laguna province, who is serving nine 40-year terms, changed from prison garb to civvies on Thursday,maybe expecting to be freed anytime. Officials, however, said he had misbehaved in prison and might not be qualified for early release. GRIG C. MONTEGRANDE

“No, he deserves to die in his cell,” Locsin tweeted, after posting a news story that quoted Dela Rosa, a former national police chief who pursued President Duterte’s brutal war on drugs that has killed more than 6,000 people since 2016.

Dela Rosa is also a former head of the corrections bureau and is pushing for the restoration of the death penalty.

Locsin, a lawyer, argued that Sanchez was not eligible for early release based on good conduct credit, under Republic Act No. 10592, which the Supreme Court had ordered applied retroactively to cover prisoners who were convicted before the law was passed in 2013.

Sanchez has so far been in prison for 24 years. He was sentenced in 1995 to seven prison terms of reclusion perpetua or up to 40 years each for the rape and murder of University of the Philippines Los Baños (UPLB) student Eileen Sarmenta and the murder of her friend Allan Gomez.

“The law is wrong; the Supreme Court was wrong. He got seven life sentences. True law favoring a convict has retrospective effect on his sentence. That spares him having to finish one of 7 life sentences. He has 6 or 200 years more. Period,” Locsin said.

He said Sanchez had to serve all his seven sentences “otherwise why bother to impose more than one term of life imprisonment. Logic.”

Locsin said he was in favor of releasing prisoners whose sentences were reduced for good conduct, starting with female and elderly prisoners.

“And leave that son of a bitch to rot,” he stressed.

Dela Rosa explained that his remark was only referring to what Sanchez was entitled to under the law.

“By operation of law, he deserves a second chance,” he told reporters.

If it had been up to him, he said Sanchez should have faced the death penalty, but the penalty was not available then.

“But there’s nothing we can do. What can we do? Do not blame me? I am not the one who made the law,” he said.

Dela Rosa also said that when he was the corrections chief, he had received reports that Sanchez had been wearing skirts and lipstick and carrying bibles. He was told Sanchez was a “changed man,” he added.

Justice Secretary Menardo Guevarra explained that prisoners sentenced to multiple prison terms, like Sanchez, were not expected to serve time beyond 40 years.

He said regardless of the number of prison terms meted out to an offender, the maximum time of imprisonment could not exceed 40 years.

The former mayor would serve both sentences successively, but the maximum time served would still be 40 years, Guevarra said.

Regardless of the number of cases of a prisoner, good conduct time allowance would apply on the total sentence being served, which may not exceed 40 years, he said.

Senate Minority Leader Franklin Drilon said Sanchez was not qualified under the good conduct time allowance law because of his involvement in the drug trade, referring to two instances—in 2005 and 2010—when “shabu” (crystal meth) was found in his cell.

He pointed out that under the implementing rules and regulations of RA 10592, good conduct referred to “conspicuous and satisfactory behavior of a detention or convicted prisoner consisting of active involvement in rehabilitation programs, productive participation in authorized work activities or accomplishment of exemplary deeds coupled with faithful obedience to all prison/jail rules and regulations.”

Senate President Vicente Sotto III said he wanted a review of RA 10592 that would shave time off a convict’s sentence for good behavior.

The law should be amended so that those involved in heinous crimes would not be eligible for reduced sentences due to good behavior.

In a resolution he filed on Thursday, Sotto said lawmakers could consider including a provision that would forfeit inmates’ earned good conduct time allowance if they commit a crime.

No signs of remorse

Sen. Risa Hontiveros said she believed that Sanchez was not qualified for good conduct time allowance.

“Sanchez has shown no signs of remorse and displayed no effort at improving himself in behavior or character inside the penitentiary. In fact, even inside prison, he has continued committing crimes with impunity,” she said.

“Freeing an unrepentant criminal who refuses to take responsibility for his brutal crimes and has even committed new and serious crimes while serving time is not restorative justice. It is a mockery of justice and itself a crime,” Hontiveros added.

Sen. Sonny Angara, one of the authors of the law when he was a member of the House of Representatives, said reducing prison time served could not be “computed separate and isolated from other factors that must be considered.”

“There are qualitative considerations like good behavior or if the inmate, by his actions, had exhibited true remorse and rehabilitation,” Angara said in a statement.

Sen. Francis Tolentino said the Department of Justice must set up a website to list all the prisoners eligible for good conduct time allowance so that the public, aside from the victims’ families, would know who would be set for early release.

Tolentino also said the case of Sanchez supported calls for the restoration of the death penalty.

At the House of Representatives, ACT-CIS Rep. Eric Go Yap said he would file a resolution asking Congress to look into the loopholes of the law and correct any “injustice” in the measure.

“While we respect the rights of the accused that they deserve a second chance, we should take into consideration victims and their families of heinous crimes,” he said.

Presidential spokesperson Salvador Panelo, who once served as Sanchez’s lawyer in the rape-slay case, said Malacañang could not oppose any law and pointed out that if a convict qualified for release under RA 10592, then “we cannot do anything.”

“The best remedy there is you amend the law or repeal it. That’s for the lawmakers. Until the law is there, we cannot do anything. They have to amend the law,” Panelo said.

He declined to comment whether his former client deserved a second chance, saying he had no personal knowledge of Sanchez’s activities in prison. —WITH A REPORT FROM JULIE M. AURELIO