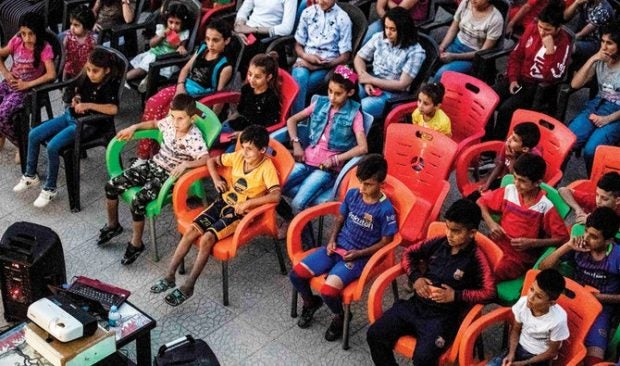 In a schoolyard of rural northeastern Syria, boys and girls break out into giggles watching Charlie Chaplin’s pranks, a rare treat, thanks to a mobile cinema roving through the countryside.

In Kurdish-held areas of the northeast, filmmaker Shero Hinde is screening films in remote villages using just a laptop, projector and a canvas screen.

“We have already shown films in towns but we wanted children in the villages to enjoy them too,” said the bespectacled 39-year-old with thick greying curly hair.

With some films dubbed into Kurdish and others subtitled, he and a team of volunteers want to spread their love of cinema across Rojava, the Kurdish name of the semi-autonomous northeast of war-torn Syria.

“Our goal is that in a year’s time, there will not be a kid in Rojava who has not been to the cinema,” the Kurdish filmmaker said.

Sitting on colored plastic chairs in the village of Sanjaq Saadun just before dusk, the boys and girls watch wide-eyed as the first black-and-white images of “The Kid” appear on the screen.

Lively piano music rings out across the school basketball court, as Chaplin plays a tramp who rescues an orphaned baby in the 1921 silent movie.

Laughter rises above the darkened playground as he tries to clean the baby’s nose or to feed him from a kettle strung from the ceiling.

In local minds, cinema is also tied to tragedy, after a fire ripped through a theatre in the nearby town of Amuda in 1960, killing more than 280 children.

The mobile cinema, says Hinde, aims to introduce young children to the magic of the silver screen from the early days of moving pictures, something he missed out on as a schoolboy.

“When we were kids, the cinema was that dark place,” said the filmmaker, wearing black-rimmed glasses and a green t-shirt.

In primary school, he and others were taken to see films inappropriate for their age and in substandard conditions, he recalled.

It was only later that he discovered “the truth and beauty of cinema.”

To give today’s children a different experience, “we are now trying to substitute that darkness for something beautiful and colorful”, he said.

The mobile cinema’s objective is also to screen “films linked to protecting the environment and personal freedoms,” Hinde said.

On another evening in the village of Shaghir Bazar, children rushed in before the film started to grab front-row seats.

On show that day was “Spirit”, an American animated adventure film about a wild stallion captured by humans who dreams of breaking free and returning to his herd.

Among the audience, Amal Ibrahim said her 7-year-son Kaddar and 6-year-old daughter Ayleen were brimming with excitement.

“They could hardly wait to come. They have never been to the cinema before,” she said in Kurdish.

Even some of the village’s older men had turned up to see the cartoon adventure, after not having been to the cinema in decades.

Standing to one side, they reminisced about the films of their youth.

Fifty-six-year-old Adnan Jawli came along with his two children.

“Today, I brought my kids to the cinema and all my memories are flooding back,” he said.

“Forty years ago, I would go to the cinema and watch the film from outside through the window,” Jawli said. “It was such a great feeling when the lights dimmed and the film started.”

Hinde’s own credits include “Stories of Destroyed Cities”, a feature-length film about three towns in Syria and Iraq on the road to recovery after Kurdish forces expelled the Islamic State group.

Apart from spearheading the defeat of the jihadists, Syria’s Kurds have largely stayed out of the country’s eight-year war, instead of working towards autonomy after decades of marginalization.

Though Kurdish-led fighters are still battling sleeper cells, Hinde and his team are already looking to the future.

Beyond their roving cinema, they dream of opening a movie theater at a fixed location.

“But that will depend on the war ending and stability returning to the country,” he said. HM/JB

Read Next
Snapped up: Pre-wedding photo industry booms in China
EDITORS' PICK
Metro Manila posts lowest temperature yet this ‘amihan’ season at 19°C
DOH: 28,471 new COVID-19 cases in PH; active cases now 284,458
Gear up and get ready to play with Yamaha Mio Gear
Acer starts the year off strong with the Aspire Vero National Geographic Edition
On Day 2 of implementation, gov’t says workers now exempt from ‘no vax, no ride’ policy
Over 3 Million worth of prizes to be won at Smart Padala’s SENDali Manalo Promo!
MOST READ
Cold-case investigation names surprise suspect in Anne Frank’s betrayal
Emma Stone calls Andrew Garfield a ‘jerk’ after he ‘lied’ about his ‘Spider-Man: No Way Home’ appearance
Derek Ramsay on being married to Ellen Adarna: ‘Gumaan ‘yung mundo ko’
Czech anti-vax singer dies after deliberate infection
Don't miss out on the latest news and information.