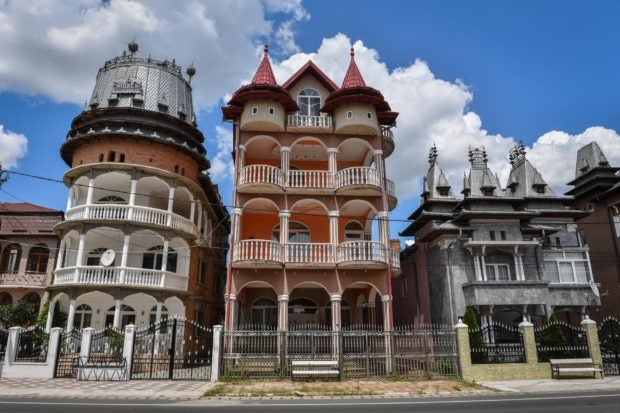 Amid modest surroundings of fields or small towns, the so-called Roma palaces seem improbable, even outlandish but reveal a quest for status within a marginalized and mostly poor minority.

They began springing up in the early 1990s after the collapse of communism when some in the Roma community came into money, they say, mostly by collecting and selling scrap iron or by doing petty trading.

Now spread across one of the European Union’s poorest members, the imposing buildings, estimated to number several thousand, often stand several stories high, as neighbors add floors to outdo one another.

Decorative flourishes such as the American dollar sign or a German car brand logo can be seen mounted on some of the facades as a symbol of wealth.

Romanian architect Rudolf Graef said that, although often ridiculed as “absolute kitsch,” the style of the “Roma palaces” should not be dismissed.

It “reflects, paradoxically, a part of Romania’s history, unlike contemporary architecture implemented by the state itself,” he said.

The roofs in particular, with their gables and twisty steeples reminiscent of Asian temples, are an “exaggeration” of the country’s typical architectural elements, he told AFP.

Styles differ from region to region, according to Graef, author of a study on the topic.

In central Romania, the houses are inspired by Catholic churches, while they copy neoclassical structures in the southwest and neo-Romanian traditions in the east and south, with interpretations of traditional farmers’ houses or those of ancient boyars, or aristocrats.

But, says Graef, despite their variations, they all have one common goal, that of showing off the “prestige and success” of those who live in them.

At times, the structures can even replicate existing public buildings, such as one with a particular back story in the village of Buzescu, 100 kilometers (60 miles) south of the capital, Bucharest.

Dan Finutu, a locally prominent and reportedly wealthy member of the Roma community who died in a car accident in 2012, had had his home modeled on the courthouse where he was sentenced to jail for fraud in the 1990s.

“The sources of funding for these palaces are unclear,” Graef said.

Many of the Buzescu owners have said that they made money through scrap metal and still do that as an occupation; others have gone abroad to work.

The end of communism heralded a laxer legal environment in which it was easier to make money.

The Roma were also able to affirm their identity after the fall of dictator Nicolae Ceausescu’s regime in late 1989.

For centuries, the traditionally nomadic minority was reduced to slavery and then subjected to forced assimilation under communism.

For his part, Costica Stancu, a Buzescu Roma community leader, linked the emergence of the first “palaces” to the return to the Roma of some of their gold that had been confiscated by the communists.

The Roma have long observed the tradition of giving gold coins as presents at the birth of a child or a marriage.

The coins are passed down the generations, and Roma women often turn them into necklaces.

But in 1978, the communist regime adopted a decree forcing all Romanians officially, but mostly targeting the Roma, to turn their gold over to the authorities.

In most cases, the handover was formally documented, which helped in the return of the gold to the Roma under post-communist legislation.

With a population of 4,000, Buzescu has dozens of “Roma palaces” lining its main street, to the delight of passing tourists.

Most of Romania’s two million Roma, about 10% of the population, remain impoverished, however.

And for all their ostentation, the mansion owners often live in just one or two rooms, reserving the big salons decked in marble and gold for special festive occasions, Stancu said.

“Maintenance is very costly,” added the 72-year-old, noting that fewer “palaces” were being built today.

A number of the Buzescu homes even appear deserted, and Stancu who himself lives in a little house with a garden reckons that those under construction won’t be finished for lack of money.

A “palace” owner in her 60s who gave her name only as Lidia said that many Roma who can afford it leave.

“Things aren’t like before,” she said, her voice tinged with bitterness, standing outside her imposing entrance gate.

“People have left, for Bucharest or abroad,” she said. “They want to earn money and stay there.” HM/JB

500 years ago, Europeans set off to explore the world