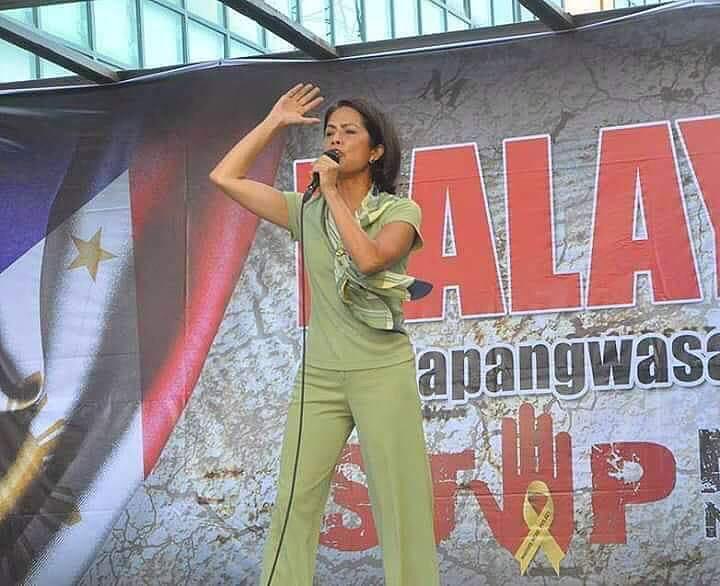 Gina Lopez speaks before thousands of Mindoreños protesting Norwegian firm Intex Resources‘ $2.5 billion nickel mine project on Mindoro island during a rally in Calapan City in June 2015, about a year before she was appointed chief of the environment department. (Photo courtesy of Orlando Maliwanag)

Former social welfare secretary Judy Taguiwalo said  Lopez, best known for ordering the closure of mining sites nationwide during her brief stint at the Department of Environment and Natural Resources (DENR), was ‘sincere’ in caring for the environment.

“Gina Lopez as secretary of DENR was passionate and sincere in doing her job of protecting the environment; linking her environmental initiatives with poverty reduction programs,” Taguiwalo, who together with Lopez was part of President Rodrigo Duterte’s original Cabinet line-up, said in a Facebook post on  Monday.

“She was articulate and fearless in presenting at Cabinet meetings DENR programs that would protect the environment, safeguard indigenous communities and create livelihood programs for the poor,” she added.

Lopez succumbed to brain cancer.  She was 65.

Aside from her environmental advocacies,  Lopez  also founded and supported ABS-CBN Foundation and Bantay Bata 163, a children’s rights group which gained global attention and praise.

Bagong Alyansang Makabayan (Bayan) Secretary General Renato Reyes said Lopez was an example of what a principled leadership can do for the country.

Both parties worked for approval of the People’s Mining bill.

“Nawalan ng isang matapang na tagapagtanggol ng kalikasan sa pagkawala ni Gina. Pero we will continue her legacy and continue the struggle for the preservation of the environment,” Rep. Carlos Zarate said in a statement.

“Secretary Gina is on a league of her own in fighting for the environment. She does not care even if she has to go against big mining or logging companies, if they are destroying the natural order of things, she will do all she can to stop them,” Rep. Ferdinand Gaite added.

Rep. Eufemia Cullamat, on the other hand thanked and remembered Lopez’ move to visit indigenous people affected by environmental abuses.