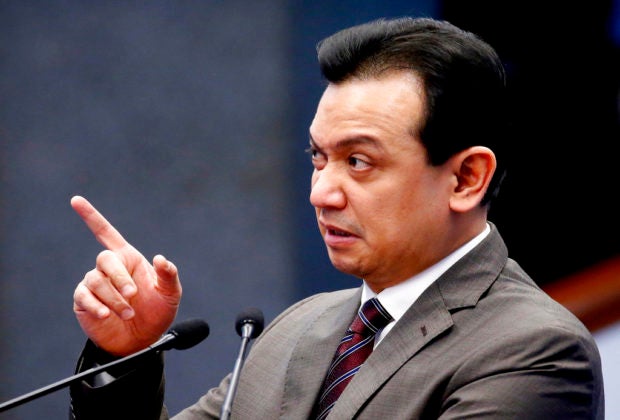 MANILA, Philippines — Senator-turned-educator Antonio Trillanes IV on Wednesday expressed disapproval on the proposal to prolong up to 60 days the detention period of arrested terror suspects.

Trillanes’ reaction came after Defense Secretary Delfin Lorenzana made a proposal during a Senate hearing to amend the Human Security Act, noting that the additional jail time would allow law enforcers “more time to develop” cases against suspected terrorists.

The former senator cited the estimated 30,000 deaths under the Duterte administration’s campaign against illegal drugs, saying that the number is “way more deaths than any terrorist has inflicted in history.”

“In truth, we should be protected from [President Rodrigo] Duterte first,” Trillanes said in a statement.

He also pointed out that authorities could not even “locate and apprehend” the riding-in-tandem suspects and drug lords, questioning their ability to also locate terrorists.

“What makes them believe they can locate and apprehend terrorists through that amendment?” Trillanes said.

The former senator also questioned the motive of the government in pushing for an extended detention of suspected terrorists when it is “summarily killing ‘suspected’ addicts [for] the past three years.”

He also noted that the subpoena powers given by Malacañang to the police, supposedly to investigate crimes effectively, was “only used against political opposition and critics.”

“There is already martial law in Mindanao and yet the security forces weren’t able to prevent bombings in Basilan and Sulu,” Trillanes also noted.

He insisted that proper use of intelligence funds, inter-agency cooperation, intel exchanges with foreign intelligence units and vigilance of the public are among the “keys to effective anti-terror operations.”

“Even granting that the anti-terror law should need to be strengthened, it should only happen under an administration that has clearly demonstrated its desire to protect its people,” said Trillanes, who is now teaching public policy to college students in two univerisities in Quezon City. /jpv

Trillanes to start teaching at UP, Ateneo after Senate stint