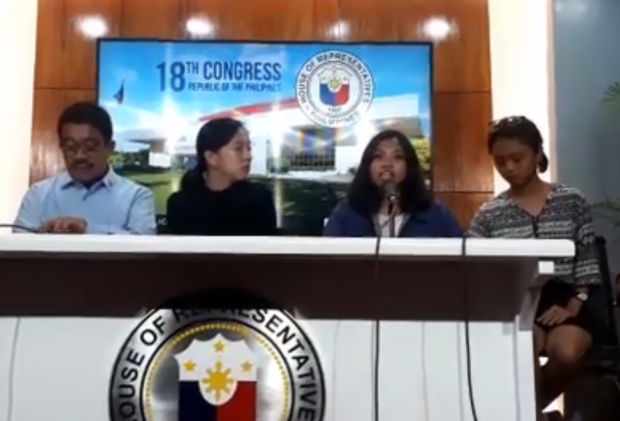 Alicia Lucena answers questions from the media during a press conference at the House of Representatives on Wednesday, August 14, 2019. Screengrab from Act Teachers Party-List video stream of the press briefing

MANILA, Philippines — Alicia Lucena, the senior high student who was reported missing by her mother, on Wednesday revealed that her parents had brought her to the police to block her from continuing her membership to progressive group Anakbayan.

And this, Lucena said, had pushed her to leave their home.

Lucena said she left home on July 10 and stayed with a friend, contrary to her mother Relissa’s claim that she went missing and was kidnapped by Anakbayan. Relissa earlier appeared at a Senate hearing led by Senator Ronald dela Rosa on the alleged recruitment of students by leftist groups to the underground movement.

Lucena said she was brought to police camps and was forced to talk to supposed New People’s Army (NPA) “surrenderers.”

Zarate said that while this could be a “traumatic” experience for Lucena, they are still urging her to reconcile with her family.

The Criminal Investigation and Detection Group said they had lodged kidnapping and other complaints against Anakbayan leaders over Lucena’s case. Elago said the complaints are just aimed at “harassing” and “silencing” progressive youth groups.

Dela Rosa, chair of the Senate committee on public order and dangerous drugs, denied this Wednesday.