Daughter refutes mom: I am not missing, brainwashed; I left home willingly 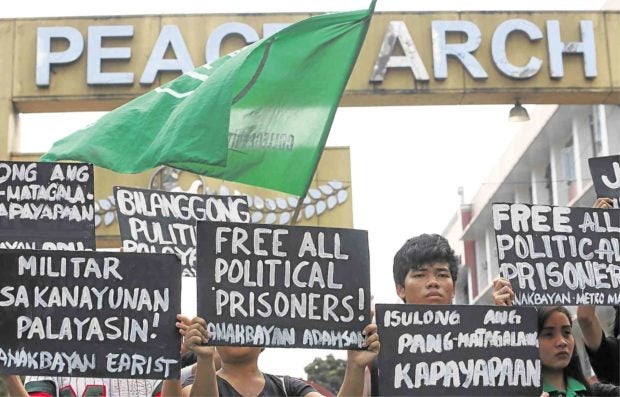 Members of militant group Anakbayan urge the Duterte administration to resume peace talks, release all political prisoners and remove the military from rural communities at a rally near Malacañang Palace in February.—MARIANNE BERMUDEZ/INQUIRER FILE PHOTO

MANILA, Philippines — The daughter of a woman, who testified before a Senate inquiry on the alleged recruitment of students by leftist groups, has clarified that she never was missing nor kidnapped, or even brainwashed by Anakbayan.

Alicia Lucena, child of Relissa Lucena who turned emotional during a Senate hearing on Wednesday, insisted on a Facebook post that she left her home voluntarily and nobody forced her to do so.

Instead, the Far Eastern University (FEU) student insisted that a family problem was the reason why she went away.

On Wednesday, Alicia’s mother revealed that she had considered committing suicide when her daughter left their home and studies to join the militant group Anakbayan.  With her daughter gone for three days, she reported it to authorities.

But that move even created a bigger rift between the mother and daughter.

Contrary to her mother’s statements, however, Alicia claimed that Anakbayan did nothing to brainwash her.

In the end, Alicia criticized the government and the military for allegedly using her and her family for their anti-progressive propaganda.

“Para sa AFP at sa rehimeng Duterte (To the AFP and Duterte administration): Don’t you dare use me and my family to cover up your inutility and rotten administration,” she said.