MANILA, Philippines – Senator Ronald “Bato” dela Rosa on Wednesday rebuffed criticisms that the Senate inquiry on the alleged disappearance of students recruited by leftist groups, which he is leading, is meant to harass critics of the Duterte administration.

Dela Rosa, who chairs the Senate Committee on public Order and Dangerous Drugs, clarified that the hearing, which started last Wednesday,  is aimed at getting the side of parents whose children allegedly disappeared after being recruited by leftist groups. 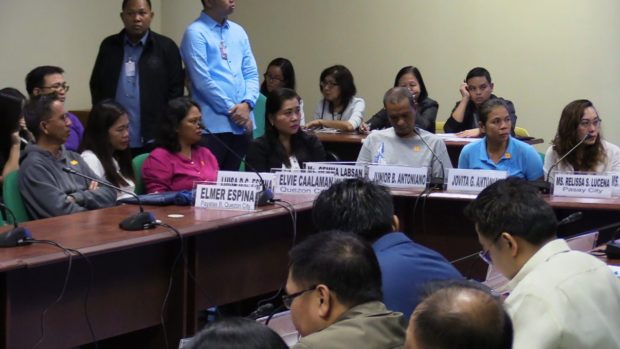 Parents of some of the missing students (INQUIRER.NET PHOTO/CATHY MIRANDA)

“We are not here because the groups who have allegedly recruited their children are critics of administration,” Dela Rosa said in his opening statement during the second installation of the inquiry.

“We are here voluntarily because their children are being coddled by these organizations and they (parents) have grown desperate because their pleas have not been heeded by the said groups,” he added.

READ: Anakbayan: Bato an ‘utter fool’ for picking on students-activists

Dela Rosa also took a swipe at those who said that the probe is “meant to suppress student activism,” saying that the comment mocks the parents who presented their plight during the hearing.

“We would also like to address the issue that this hearing is meant to suppress student activism. To say that is a mockery to the parents who willingly exposed themselves publicly, risking public scrutiny of their personal lives and probably putting into question their parenting,” he said.

Dela Rosa insisted that the probe is “about protecting the basic unit of our society.”

“As a senator of the Republic, and as a parent myself, I am convinced that I am called upon to protect the Filipino family as the basic social institution and to ensure that this institution remains intact,” he said.  /gsg