Anakbayan: Bato an ‘utter fool’ for picking on students-activists 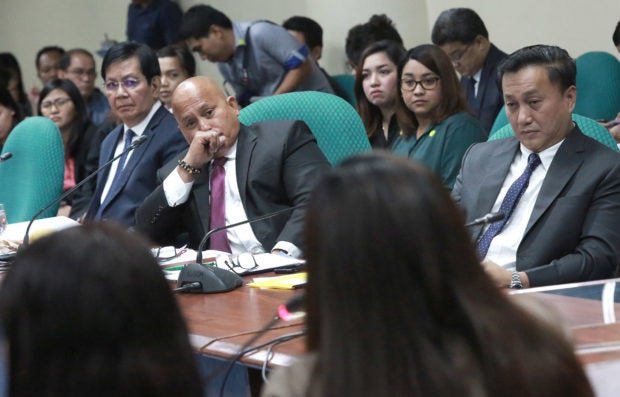 Senators Panfilo “Ping” Lacson, Ronald “Bato” dela Rosa (center), and Francis Tolentino listen to the agonizing stories of mothers whose children were recruited to join left-leaning organizations during the Senate Committee on Public Order and Dangerous Drugs hearing on Senate Resolution No. 38 Wednesday, August 7. Filed by Dela Rosa, the resolution seeks an investigation on the missing minors who were recruited by members of Kabataan Partylist and Anakbayan supposedly to become NPA combatants. PRIB PHOTO

MANILA, Philippines — Youth leftist group Anakbayan on Monday called Senator Ronald “Bato” Dela Rosa an “utter fool” for cautioning parents to observe changes in their children, who may have been recruited in communist organizations.

“Bato is an utter fool thinking that children will remain static. Children grow up into mature adults unlike him,” Anakbayan Spokesperson Alex Danday said in a statement.

“Changing means that we have learned to ask questions, to tell right from wrong, and make our own decisions – something that Dela Rosa has never learned in his 57 years,” he added.

On Saturday, Dela Rosa also urged parents to take necessary actions if they find that their children have been brainwashed by Left-leaning organizations.

Dela Rosa, who chairs the Senate committee on public order and dangerous drugs, led a Senate probe last week on students who went supposedly missing after allegedly joining groups such as Anakbayan and League of Filipino Students.

Danday added that parents should be proud of their children “for taking a political stance in this day and age.”

“It means that they have been raised well, to value the dignity of human life, to resist oppression, tyranny, and injustice, and fight for the rights and welfare of the Filipino people,” Danday said.