Bangsamoro chief calls on BARRM leaders to sacrifice for region 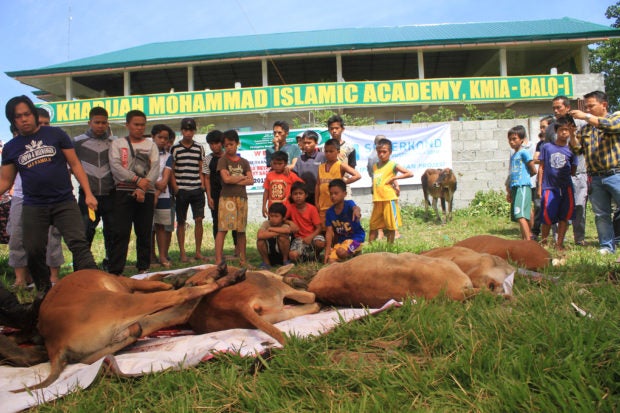 The Care Foundation of Turkey butchers 2, 500 calves during the Eid’l Adha (Feast of Sacrifice) for the different communities in Mindanao. The meat is divided into three parts: for the families, for the neighboors and for the poor . In Lanao del Norte some 250 calves are being slaughtered in Balo-i town and given to the evacuees living in tent city in Marawi City and nearby towns. PHOTO BY RICHEL UMEL

COTABATO CITY –– Just as Prophet Ibrahim (Abraham) sacrificed his son Ismael to prove his loyalty to God, leaders of the Bangsamoro Autonomous Region in Muslim Mindanao (BARMM) must also be ready to sacrifice themselves for the sake of the Bangsamoro, Chief Minister Ahod Ebrahim said during Sunday’s Eid’l Adha celebration.

Ebrahim called on Bangsamoro leaders to strive for moral governance (to fight corruption) in the Bangsamoro and to continue their pro-active stance on peace as the Muslim world observed the 2019 Eid’l Adha (Feast of Sacrifice) on Sunday, August 11.

“Our enemies are no longer the Armed Forces of the Philippines; in fact, we are already laying down our arms. We have shifted our struggle from an arm(ed one) to governance, moral governance,” Ebrahim said in his Eid’ld Adha message during the congregational prayer presided by Bangsamoro Grand Mufti Abu Hurairah Udasan inside the BARMM compound on Sunday.

He called on employees and officials of the regional government to make some personal sacrifices for moral governance just as Prophet Ibrahim (Abraham) was also tried to sacrifice his son, Ismael.

He said President Duterte’s vow to correct historical injustices committed against the Bangsamoro people also showed his desire for peace.

About 3,000 Muslim faithful joined the congregational prayer inside the 10-hectare BARMM compound where Grand Mufti Udasan rallied the Bangsamoro to follow the footsteps of Prophet Mohammad in their daily lives.

Ebrahim also called on the Bangsamoro to pray for Muslims confronting difficult situations in different parts of the world.

“Let us not forget our brothers and sisters all over the world who are facing challenges in their lives and need help,” he said.

“May the purity of our intentions in the struggle of attaining genuine peace and development is sustained,” he added.

Although Eid’l Adha was celebrated on Sunday, President Duterte declared Monday as a regular non-working holiday nationwide, giving workers both in the public and private sectors a long weekend.

“It is significant for us to celebrate the feast of sacrifice and remember the sacrifice of Prophet Abraham,” Dr. Mehmet Riza Derindag, president of the Care Foundation of Turkey, said.

“The significance of Eid’l Adha is the story in the Quran and the Bible that we sacrifice animals instead of killing one another,” he said.

In the cities of Marawi and Iligan and the provinces of Lanao del Norte and Lanao del Sur, the Care Foundation of Turkey slaughtered 2,500 calves and fed them to poor Muslim communities in different parts of Mindanao.

“We distributed food to poor families. Under normal circumstances, the meat has to be divided into three parts; to represent the family in the first part, the neighbors in the second part and the poor for the third part,” he said.

He said they distributed food in the evacuation sites of Marawi City and the communities of Zamboanga, Misamis Oriental, Cagayan de Oro City, General Santos City, and Cotabato City.

“We wish and pray to Almighty God that we bring eternal peace in the Philippines and the whole world,” Derindag said.

“Jesus says, ‘I will give you a new commandment that you shall love one another.’ Prophet Mohammad says, ‘You can not enter paradise without complete faith, you can not have complete faith without loving one another.’ With this, we just pray that this will bring love, peace, understanding, harmony among Muslims and Christians in the world,” he said.