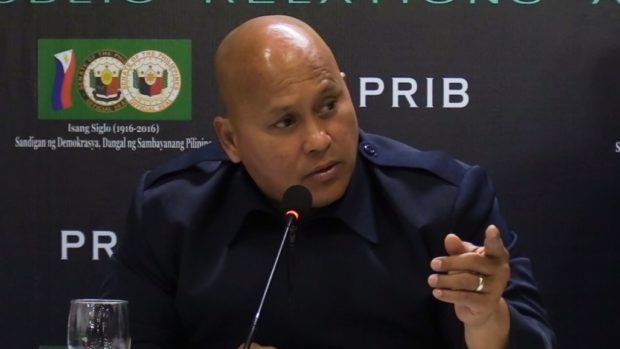 MANILA, Philippines — Neophyte Senator Ronald “Bato” dela Rosa has cautioned parents to observe the unusual activities of children who may have been recruited by communist organizations.

Dela Rosa, who is chair of the Senate committee on public order and dangerous drugs, recently led the Senate hearing into the alleged recruitment being done by leftist groups among student.

The mothers of these minors turned emotional during the Senate inquiry, noting that their children have been reportedly missing after joining leftist groups including Anakbayan and League of Filipino Students.

Dela Rosa then urged parents to take the necessary measures as he warned of children being allegedly brainwashed by leftist groups.

“There are no missing minors. All those purported to be ‘missing’ are above the age of 18. Joining Anakbayan is a purely voluntary act of every single member, done of their own free will and volition. Every member is free to join and leave at any time,” Anakbayan said in a statement on their official Facebook page on Thursday.

The Communist Party of the Philippines (CPP) on Friday also told Dela Rosa and Philippine National Police chief Gen. Oscar Albayalde that the Philippines could face worse situation if they will halt student activism. /jpv

Read Next
Funding sought for P4.5B, 66km road linking Davao, Malaybalay cities
EDITORS' PICK
UK’s Boris Johnson will resign, BBC reports
Unemployment rate up to 6% in May
Geek out at TOYCON 2022 powered by Smart Signature
High inflation: Your P1 is now worth only 87 centavos
High-risk pregnancy: Reducing your risk is in your hands
House energy committee chair Arroyo bats for cheap electricity
MOST READ
Suspect in grisly killing of missing woman in Bulacan arrested
Kim Atienza’s daughter flaunts bikini body in response to critics of her ‘revealing photos’
Number of active COVID-19 cases in PH breaches 11,000
Ex-Defense chief Lorenzana is the new BCDA chair
Don't miss out on the latest news and information.