Recto to Palace: Send own version of Security of Tenure bill 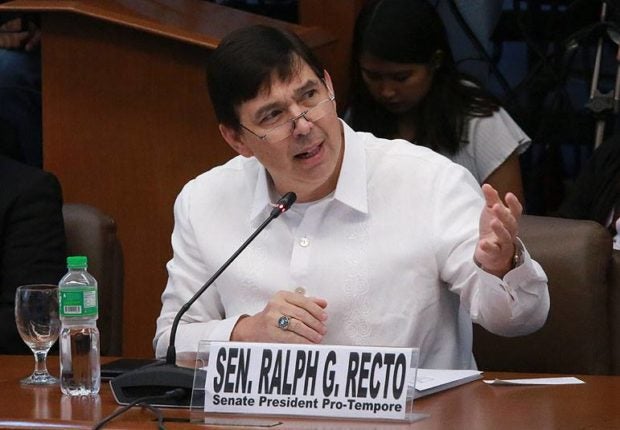 MANILA, Philippines — Malacañang must send to Congress its own version of the Security of Tenure bill, Senate Senate President Pro Tempore Ralph Recto said on Saturday, a day after President Rodrigo Duterte vetoed the measure.

“Press ‘reboot’ and file the bill again,” Recto said in a statement. “But this time, the Executive Branch should write its own version and send it to Congress with an attached presidential certification as to its urgency.”

On Friday, presidential spokesperson Salvador Panelo officially announced that the President vetoed the bill, which would have ended the labor-only contracting scheme.

In his veto message, the President said his vow to protect workers’ rights remained firm despite his not signing the measure.

He added that “while labor-only contracting must be prohibited, legitimate job-contracting should be allowed” provided that the contractor would be “well-capitalized, has sufficient investments and affords its employees all the benefits.”

Recto said, however, that the Palace would have to send its own version.

“This is needed because the veto message did not cite the specific provisions that triggered the veto,” he sad. “Let the burden of proposition fall on them this time. But this will be for the information of Congress only, and should not mean that it must be the one passed en toto,” Recto said.

“Lastly, this episode underscores once again the need to strengthen its liaison work with Congress,” he added.

Sen. Joel Villanueva, who sponsored the measure, expressed dismay over the veto message, saying: “We knew right from the start that the odds were stacked against the measure.”

Prohibiting labor contractualization was one of the President’s promises when he assumed office in 2016.

The issue was not mentioned during his fourth State of the Nation Address.