Beyond legislation: Political theatrics in Congress

MANILA, Philippines — Packed with star power, incoming lawmakers were a mix breed enough to send foyers buzzing ahead of the opening of the 18th Congress.

But amusement and glitz aside, the latest roster of legislators gives a glimpse of what lies ahead for the nation in the last three years of President Rodrigo Duterte’s term.

At the Senate are new yet familiar faces that already graced the public spotlight in one way or another. The House of Representatives, on the other hand, has embarked on a teleserye-like Speaker race.

But everything seems to boil down to one thing – loyalty to the President.

The Senate today isn’t only dominated by administration allies for it now also has a “direct line” to the President: Senator Christopher Lawrence “Bong” Go.

Go has come a long way from being Duterte’s longtime and faithful adjutant to being a senator of the republic – all in three years since he rose to national prominence and entered public consciousness upon the former Davao City mayor’s assumption into the presidency.

The two are quite inseparable with Go mostly seen literally behind the President or in front of the most powerful man (and men) in the land doing a selfie or groufie, hence, the moniker “Pambansang Photobomber.”

Duterte’s fondness of Go was so visible that the Chief Executive even accompanied his assistant when he filed his certificate of candidacy for senator at the Commission on Elections in Intramuros, Manila. Expectedly, when Go won the Senate race, he took his oath of office before Duterte in Malacañang.

Even if Go was already officially declared winner of the May 2019 polls, he clearly remained part of Duterte’s retinue in all presidential events, including the Association of Southeast Asian Nations Summit in Thailand, and the President’s four-day visit to Tokyo for the Japan for Future of Asia international conference, among others.

READ: Bong Go thanks OFWs in Japan, vows to prioritize their welfare

And even after Go has been sworn to office, he was still seen in several official events of the President. In fact, he accompanied Duterte when he visited the military base in Indanan, Sulu, which was attacked by suicide bombers last June 28.

He was also at the Malacañan Palace assisting Duterte, who was practicing for his fourth State of the Nation Address, on Friday, July 19. 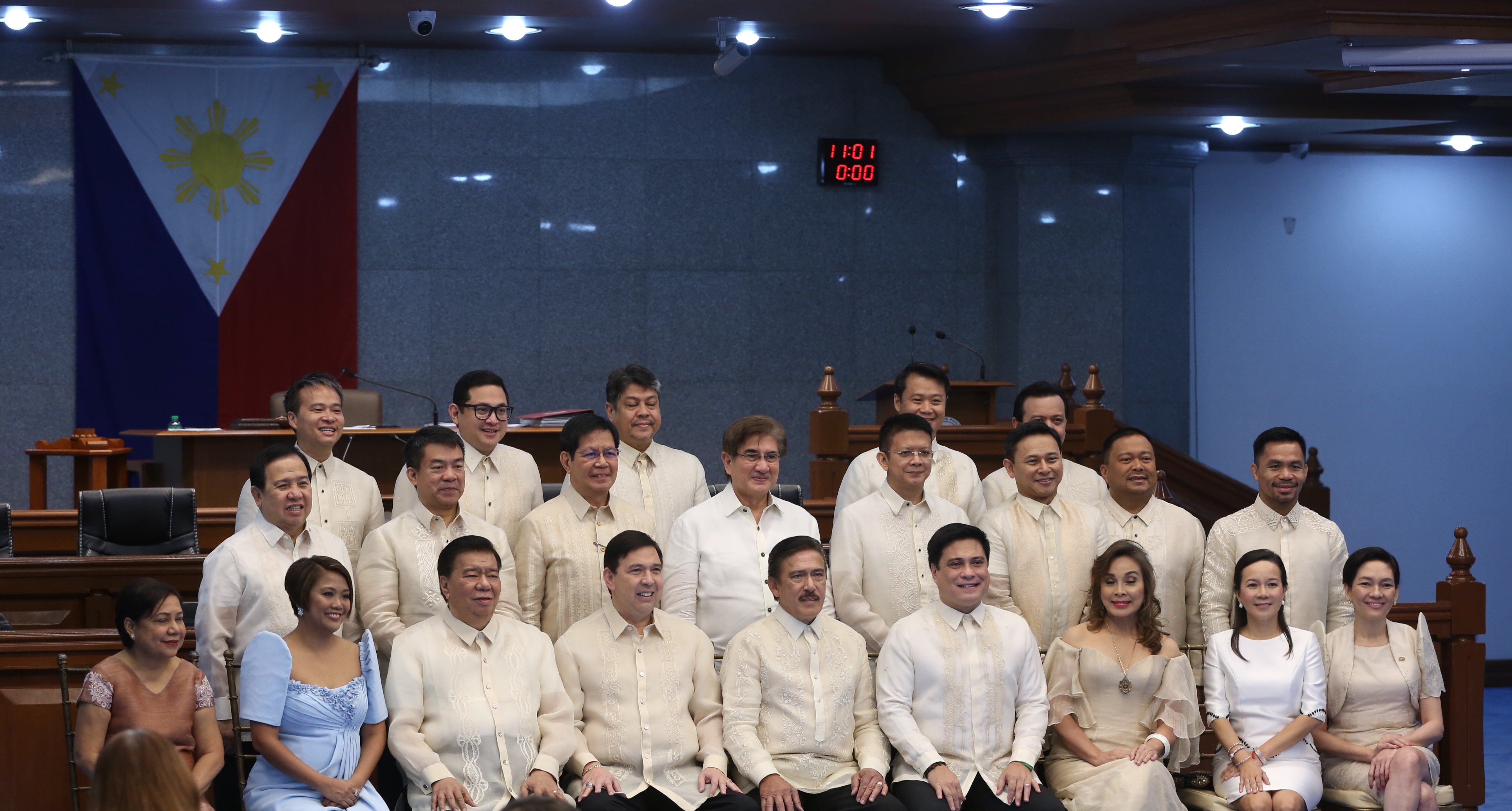 Members of the Senate pose for a photograph during the opening session of Senate on July 22, 2019. INQUIRER PHOTO / NIÑO JESUS ORBETA

But this intense fealty to Duterte had people questioning Go’s capability to independently navigate the waters of the legislature. Critics said he might just be the rubber stamp of Duterte at the Senate. Go, however, took the criticism lightly, quipping: “Mukha po ba akong rubber stamp? Senador po ako. Wala pong rubber stamp sa Senado.”

But his success at clinching the third spot in the senatorial contest was not only thanks to Duterte.

Go owes much to his “celebrity volunteers” as well for these entertainment stars joined or represented him in campaign sorties, luring crowds especially in the countryside. Among Go’s celebrity volunteers were actor Phillip Salvador, comedians Ai-Ai Delas Alas and Bayani Agbayani, and child star Alonzo Muhlach.

Go even got the backing of Kris Aquino – sister of Liberal Party stalwart and former President Benigno “Noynoy” Aquino and daughter of democracy icon former President Corazon C. Aquino, despite her being a subject in one of Go’s skits at a campaign rally with Salvador, her former flame.

Another one of Duterte’s ardent ally has also been catapulted to the Senate in the last midterm elections.

Ronald “Bato” Dela Rosa, former Philippine National Police chief and one of the main executors of the Duterte administration’s anti-criminality drive and the drug war, was in some way like the firebrand President. He is said to be charismatic, hates drugs, and talks tough, too.

The Davao-born cop’s life story had been immortalized through a Robin Padilla-produced and directed film, “Bato: The Gen. Ronald Dela Rosa Story,” with no less than Padilla himself portraying Dela Rosa.

Dela Rosa’s emotional burst during a Senate hearing on the alleged State-sponsored extrajudicial killings betrayed his brawny physique. He was outspoken during the inquiry albeit tearing up in front of the senators, cameras, and millions of Filipinos.

And now that he is senator, Dela Rosa admitted he still has a huff on that episode and even vowed to not hold “paepal-epal” Senate hearings nor make resource persons cry.

But Dela Rosa is trying to veer away from perceptions that, like Go, he would only be a go-ahead man of Duterte at the Senate. Even if his relationship with the President can be traced to many years back, Dela Rosa assured Duterte will not meddle with his job as a senator.

Recalling a phone call with the President, Dela Rosa shared: “Ang sabi nya sa akin ‘Bato, you are already a senator of the Filipino people, you are not a senator of Duterte, hindi kita pakikialaman dyan sa trabaho mo.’”

Nonetheless, the nation’s ex-top cop got off to a rocky start when he defended the Duterte administration’s brutal campaign against illegal drugs and then shit happened: He took the death of a three-year-old during a police anti-drug operation as if it was merely a part of so-called “collaterals” in the drug war. And this has earned him admonitions.

“But of course, we are in an imperfect world. If you’re a policeman, do you want a child to be hit? Never, because you have a child as well. You don’t want something like that to happen. But shit happens during operations, shit happens,” Dela Rosa said during his first forum at the Senate.

READ: Shit happens, Bato says after a child got killed in drug bust

Dela Rosa, however, was quick to admit that the remark was due to wrong choice of words, saying he should have used “unfortunate incidents happen” instead.

Nine years since a Marcos ended his term as senator, another Marcos is back at the Senate. And unlike Go and Dela Rosa, the victory of Imee Marcos does not have to depend on the charisma of Duterte because her main capital was her infamous surname.

Prior to becoming a senator, however, the firstborn of the late dictator Ferdinand E. Marcos had not only been plagued with questions about their family’s alleged ill-gotten wealth as well as human rights track record as her honesty was put to the spotlight with issues surrounding her education: Did she or did she not finish college or law school?

But both universities have denied so.

READ: Imee Marcos on her education background: What am I apologizing for?

Life indeed has its ironies because when Imee attended the orientation for senators and staff, she described the experience as “like the first day of school.”

Imee’s academic background aside, the Marcoses are considered an ally in the Duterte administration. Duterte has openly admitted that he thinks highly of the late dictator and believed in the way former President Marcos governed the country. For Duterte, the late strongman was the “brightest.”

Duterte allowed the burial of Marcos at the Libingan ng mga Bayani.

While Go, Dela Rosa, and Marcos appear to stir enough interest to the composition of the incoming 18th Congress, lawmakers at the House of Representatives seem like they don’t want to be outdone.

Early on, legislators at the lower chamber launched a dramatic saga on the race for the Speaker of the House.

Last year, former Speaker Pantaleon Alvarez was ousted from his seat as top leader of the House of Representatives through an alleged stealth maneuvering of presidential daughter and Davao City Mayor Sara Duterte-Carpio. Duterte’s third Sona was delayed for an hour while the drama at the House floor unfolded before the public and ended with the installation of former President and then Pampanga Rep. Gloria Macapagal-Arroyo as Speaker for the final year of the 17th Congress.

For the 18th Congress, a number of congressmen are eyeing to be Speaker but a three-corner fight between Taguig Rep. Alan Peter Cayetano, Leyte Rep. Martin Romualdez, and Marinduque Rep. Lord Allan Velasco looked imminent although Alvarez was still determined to try his luck.

One thing was clear, however. The House was divided.

Alvarez had claimed his contenders for the lower chamber’s top post supposedly offered cash to lawmakers in a bid to secure votes. Some denied the bold accusation, while some went as far as daring to take a lie-detector test with the hopes of ending the issue.

“To resolve this issue once and for all, Speaker Alvarez, Rep. Martin, and Rep. Velasco should undergo lie detector test,” Cayetano previously said in an ambush interview. “It’s just one question. Did you pay congressmen to secure votes?”

The seemingly endless exchange of punches and blows got even more frenzied when presidential son, Davao City Rep. Paolo “Polong” Duterte, announced his intention to “unite” the lower chamber and join the Speaker race.

But the younger Duterte later backtracked and said he would support fellow Davao City lawmaker and longtime Duterte ally, Rep. Isidro Ungab, to be the next Speaker instead.

On July 8, or two weeks before Duterte’s fourth State of the Nation Address, the political turmoil at the House came to a halt. As if announcing appointments, Duterte said in an event at Malacañang that there will be a term-sharing between Cayetano and Velasco as Speaker while Romualdez will be the majority leader of the House.

But will Duterte’s masterstroke maintain the calmness in the days ahead of the opening of the 18th Congress or will the lull just be a prelude to a storm? 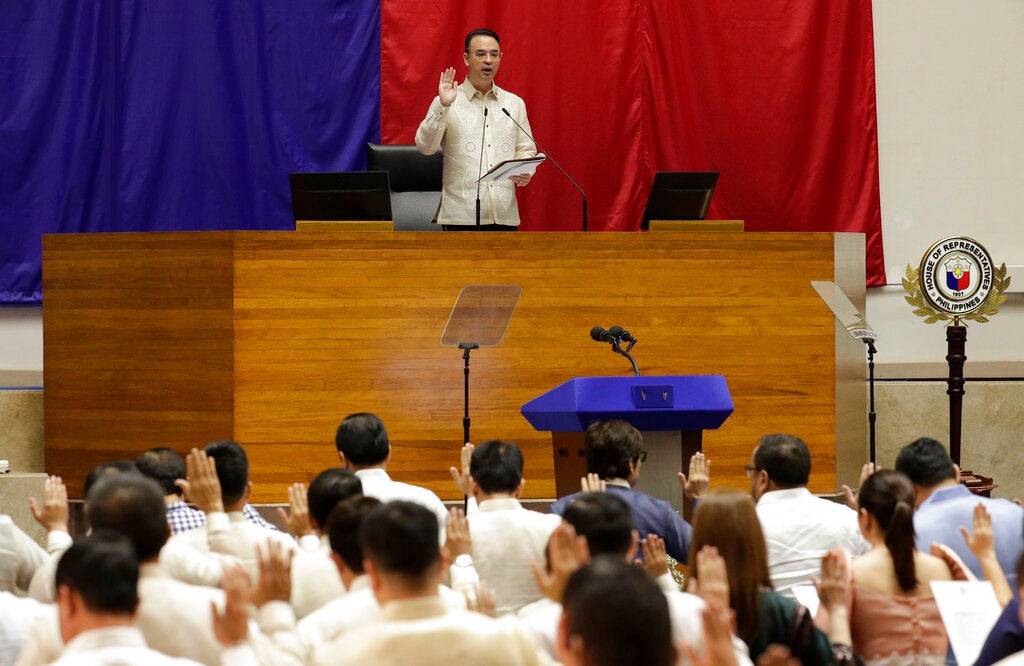 New House Speaker Allan Peter Cayetano administers oath to his fellow representatives during the opening of the 18th Congress at the House of Representatives in Quezon City on  July 22, 2019. (AP)