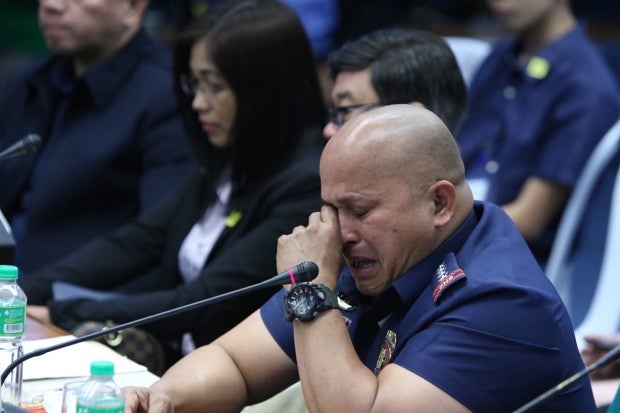 Philippine National Police (PNP) Chief Director General Ronaldo “Bato” Dela Rosa broke down into tears during a Senate hearing Wednesday, lamenting loss of the public trust and the difficulty of fighting illegal drugs in the country.

“Your honor, I can’t blame the public if they are losing trust and confidence to the police because I, myself sabi ko nga, hindi mo na minsan alam kung sino ang pagkakatiwalan (have said, you no longer know whom to trust),” Dela Rosa told the Senate committee on public order and dangerous drugs when Senator Juan Miguel Zubiri asked how he could clean the ranks of the police.

Zubiri noted in the documents that President Rodrigo Duterte had shown them, many of the personalities allegedly involved in illegal drugs are PNP officials and personnel.

READ: What made ‘Bato’ cry

“But I will never surrender . Sabi ko nga sa inyo, if you survived pre-board in the PMA (Philippine Military Academy), you will survive the world . Kaya ko ito. Hindi ko ito uurungan. Lilinisin ko ang PNP hangga’t sa makakaya ko (As I have told you, if you survived pre-board in the PMA, then you can survive the world. I can do this. I will not back down. I will reform the PNP as long as I can),” he said.

And addressing Duterte, the PNP chief promised to stick with him in the fight against illegal drugs.

“Sir, hindi kita iiwan sa laban na ito (I will never leave you in this fight). I will be with you, through thick and thin, no matter what. Lahat ng kaya ko gagawin ko (I will do everything I can),” he said.

Dela Rosa also appealed for understanding from the public, saying they are just humans and that some of them sometimes failed to resist temptations.

But he said he would not condone it, saying that poverty should not be used as an excuse to justify any wrongdoings.

“But andyan na kami sa sitwasyon na ‘yan (we are already in this situation). We will survive, we will survive. Kakayanin naming (We can do it),” the police chief said.

If the President would not be impeached or removed through a coup d’état, Dela Rosa said the government will do everything possible in six years to fix the country.

“Hindi ako superman, ako’y isang ordinaryong pulis lang pero since inilagay ako as Chief PNP ni President, gagawin ko lahat, your honor, gagawin ko. Lilinisin natin ito (I am not Superman; I am just an ordinary policeman tasked by the president to be Chief PNP. I will do everything, your honor. I will clean this up)…”

Senator Panfilo Lacson, who chairs the committee, said it was incumbent upon the police chief to do something especially if there is already a “blatant” abuse in the enforcement of law.

“I can give you so much leeway dun sa inyong enforcement pero pagka masyadong blatant na with impunity (I can give you so much leeway in your enforcement of the law, but if there is a blatant (abuse) with impunity), I think as Chief PNP you should do something…” said Lacson, who also headed the PNP during the time of former President and now Manila Mayor Joseph Estrada.

Read Next
Dalai Lama: ‘I have no worries’ about Trump’s election
EDITORS' PICK
Metro Manila now at moderate risk for COVID-19 — DOH
Pagasa: Storm Luis to exit PAR by Thursday
Peeking inside the superb night camera features of the vivo V25 series
House energy committee chair Arroyo bats for cheap electricity
POGOs not linked to Illegal online gaming, says Pagcor
Do all the things you do, faster
MOST READ
Remulla lambasts ICC chief prosecutor
Jean Garcia’s son Kotaro catches social media attention for being a V look-alike
Gov’t presses start to roll for 92 million ballots
Maxene Magalona on being asked why she has no kids: ‘It’s awkward, invasive, a bit rude’
Don't miss out on the latest news and information.