‘Attacks and harassment against the Vice President is a red line for every member of the Party’
By: Consuelo Marquez - Reporter / @CMarquezINQ
INQUIRER.net / 10:22 PM July 19, 2019 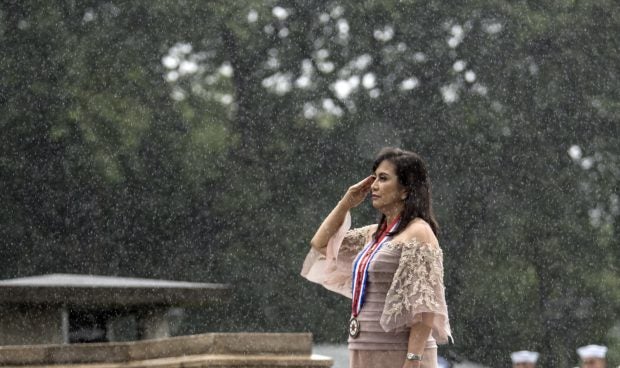 MANILA, Philippines — Liberal Party (LP) lawmakers at the House of Representatives have pledged to stand behind Vice President Leni Robredo after the Philippine National Police-Criminal Detection and Investigation Group (PNP-CIDG) filed a sedition case against her over the “Ang Totoong Narcolist” videos.

“Sa simula ng terminong ito, nanindigan na kami: Regardless of the context here in the House of Representatives, we will stand by our values and principles. We will stand firm behind the truth. This is one of those moments. We will defend the Vice President,” LP House members said in a statement on Friday.

The group issued this pronouncement despite their previous statement that they are considering to join the majority bloc in the 18th Congress.

They slammed as “fictitious” the charges against Robredo, who is being linked to the six-part video series claiming that President Rodrigo Duterte’s family and close allies are involved in the illegal drug trade.

The LP congressmen also said the complaint against the Vice President will not benefit the Filipinos.

PNP-CIDG on Thursday filed sedition, cyber libel, libel, and estafa complaints against Robredo and 35 other personalities over their alleged link in the “Ang Totoong Narcolist” videos.

Peter Joemel Advincula, who claimed to be the “Bikoy” in the videos, was among the respondents in the complaints.

Advincula in his testimony claimed the video series was purportedly part of the opposition’s “Project Sodoma” which seeks to discredit Duterte and destabilize the government. /kga

WHAT WENT BEFORE: Peter Joemel Advincula