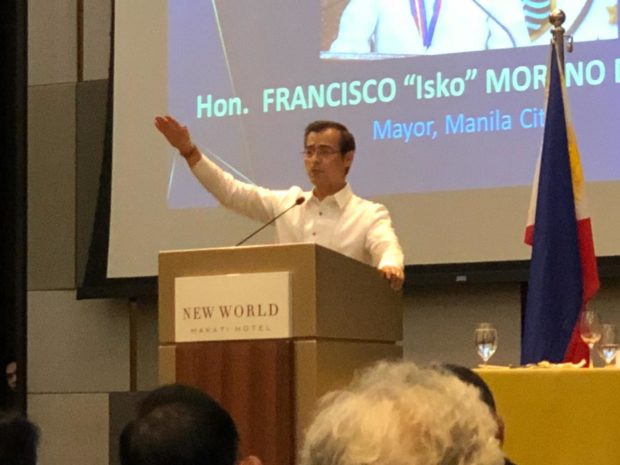 MANILA, Philippines—After declogging the streets of Manila of obstructions, mainly illegal vendors, Mayor Isko Moreno is now setting his sights on clearing the city government of obstacles in doing business.

Moreno issued Executive Order No. 8 establishing a one-stop shop for business permits and make it a permanent fixture of the city government.

“This is one way of fulfilling our promise to Manileños that we will promote ease of doing business in the City of Manila,” Moreno said in a statement.

Moreno’s EO No. 8, which he signed last July 8, seeks to “streamline the issuance of local business license, clearances, permits, certification and authorizations, as well as manage the flow of documents” in the city government.

“You used to wait for so long for a permit. Sometimes it takes eight days or even more. Now, it will just take one day and you will have your permit,” the mayor said.

Aside from the Bureau of Permits and License Division of City Hall, these offices were also ordered by Moreno to toe the line in his objective to make doing business in the city easier—cash division of the City Treasury, City Planning and Development Office-Zoning Division, City Engineering-Building Office including its Electrical Division, Manila Health Department, Electronic Data Processing and other regulatory offices in the city government.

All these offices would be under BOSS, according to Moreno’s EO.

The now highly popular mayor cited Republic Act 11032, or the Ease of Doing Business and Efficient Government Service Delivery Act of 2018, in issuing the EO and creating BOSS.

BOSS, Moreno’s EO said, is a “single common site or location” for all permits needed by an investor to start doing business in Manila.

Moreno also ordered the review of all existing processes on the issuance of permits and other documents needed to start a business.

He added that the receiving, processing and issuing of business permits and licenses “shall be made solely within BOSS as soon as practicable, in compliance with existing ordinances, issuances, rules and laws.”

The year-round BOSS will be launched on July 22.

“Towards this end, evaluation and improvement of transaction systems and procedures shall be made to conform with the new streamlined system,” the order said./TSB