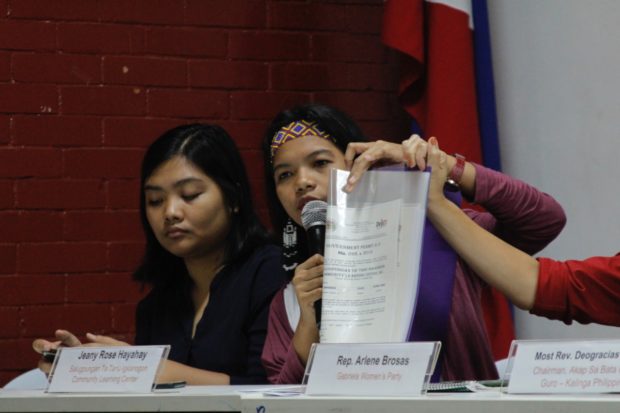 Salugpungan teacher Jeany Rose Hayahay shows their school permits granted by the Department of Education (DepEd) during a press conference in Quezon City on Friday, July 19, 2019. These permits were not renewed by DepEd due to allegations that the schools were teaching revolutionary ideologies to Lumad children. (Photo by Gabriel Pabico Lalu/ INQUIRER.net)

MANILA, Philippines — A teacher from one of the closed Lumad schools in Compostela Valley has refuted claims that they are teaching children revolutionary ideologies like using weapons and attacking government forces.

According to Jeany Rose Hayahay, it is ironic that they would incorporate building and dismantling guns in their curriculum, while the reason why they were forced to “bakwit” – a colloquial term for moving out or evacuating – was due to violence.

Hayahay also insisted that the curriculum they are using was approved by the Department of Education (DepEd), and it is a program oriented to the culture of minorities in the area.

During the press conference, she also showed certificates given by the government – due to expire this year but were not renewed based on recommendations by National Security Adviser and former Armed Forces of the Philippine (AFP) Chief Hermogenes Esperon Jr.

Last Sunday, DepEd confirmed the closure of 55 Salugpungan schools for Lumad children over allegations that they are teaching left-leaning and revolutionary ideologies.

Esperon said the schools were not operating in accordance with DepEd rules.  The report also banked on an affidavit claiming that teaching modules in Salugpungan schools encouraged students to join anti-government rallies and side with the New People’s Army (NPA).

Hayahay revealed that DepEd’s suggestion that Salugpungan students should be enrolled in existing public schools might not work, because it is too far from their houses.

She also countered claims they encourage students to rally, claiming they protested on their own because they have personally seen and experienced violence.

Hayahay then expressed hope that DepEd officials could come and visit their schools or even meet with her during her stay in Manila.  She said no DepEd official has talked with her since she arrived here.

Read Next
Loophole in sedition law was used to file raps vs Robredo – spox
EDITORS' PICK
Vietnam’s ‘crazy guy’ aims to save ocean from waste
Marcos-era elections: Not what his son signed up for
WHO says no evidence healthy children, adolescents need COVID-19 boosters
Gear up and get ready to play with Yamaha Mio Gear
Acer starts the year off strong with the Aspire Vero National Geographic Edition
Over 3 Million worth of prizes to be won at Smart Padala’s SENDali Manalo Promo!
MOST READ
‘Sampal sa gobyerno:’ Drilon wants unvaxxed PAO chief barred from working
Vice mayor slams Vico Sotto for turning Pasig into a ‘puro palabas’ city
Jose Manalo’s son Benj pays tribute to late mother: ‘You’re a testimony of God’s love’
Guevarra to Acosta: Obey rules on unvaccinated
Don't miss out on the latest news and information.