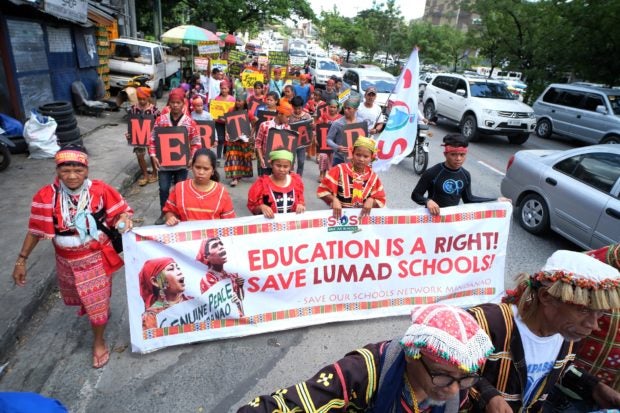 RIGHT TO EDUCATION “Lumad” students and their teachers assert their right to education during a street protest in Quezon City in this photo taken last year.National Security Adviser Hermogenes Esperon Jr. has charged that indigenous schools deviate from the Department of Education curriculum, use children in protests, and teach them “ideologies that advocate against the government.” —INQUIRER FILE PHOTO

MANILA, Philippines — Progressive groups on Sunday condemned the Department of Education (DepEd) order suspending the permit to operate of 55 schools for indigenous children in the Davao region allegedly for teaching “left-leaning ideologies.”

The nonprofit Salugpongan Ta’ Tanu Igkanogon Community Learning Center Inc., the operator of the schools, said it would appeal the order.

Issued on Wednesday and addressed to Salugpongan executive director Maria Eugenia Nolasco, the order said the schools were being temporarily shut down because of accusations by National Security Adviser Hermogenes Esperon Jr., a former military chief of staff, that were “serious enough to warrant immediate action.”

It cited a report by Esperon alleging that the schools deviated from the DepEd curriculum, used children in protests and taught them “ideologies that advocate against the government.”

The order said Esperon, vice chair of a government task force working to end the communist insurgency at the local level, also submitted a statement from Melvin Loyod, a former teacher at a Salugpongan school in Talaingod, Davao, who claimed teaching materials included the anthem of the communist New People’s Army (NPA), firearm instruction, and ambushing military troops.

“Those acts violate no less than the Constitution,” the order said.

In April, George Mandahay, a tribal leader from Sitio Kahusayan in Calinan, Davao City, asked the DepEd to shutter the Salugpongan school in his jurisdiction, echoing long-standing allegations by the government that Salugpongan schools were linked to the communist insurgency.

Loyod, in his testimony submitted to Esperon, alleged that lumad students in Sitio Pongpong were being taught to commit actions aimed at “destroying the government.”

The processing of the nonprofit’s applications for renewal of other permits was also stopped.

The DepEd gave Salugpongan five days to explain why its permit to operate schools should not be revoked.

In a statement, Salugpongan said it would fight the “fabricated accusations and Red-tagging to justify the closure of lumad schools.”

“We are saddened that the government’s mandate to recognize and uphold the right of the lumad to education and self-determination is suppressed by a militaristic approach that further marginalize the lumad,” it said.

Bayan Muna’s Cullamat said the DepEd, by issuing the order, would deprive lumad children their right to education.

“[The] DepEd wants the lumad not to wake up to realities and to keep them fooled, victimized and deprived of their rights so it will be easier to rob them of their ancestral land, which is their life,” said Cullamat, herself a lumad and a leader of the Manobo.

The lawmaker said it was only right that indigenous people were taught to resist intrusion by mining and logging companies on their ancestral land that caused environmental destruction.

“The lumad have the right to form and govern their own system of education and language based on their own culture. This is in accordance [with] the United Nations Declaration on the Rights of Indigenous People,” Cullamat said.

“[The] DepEd must immediately rescind its suspension order,” she said.

Cullamat urged the United Nations to investigate the plight of indigenous communities under the Duterte administration.

Save Our Schools (SOS), a network of children’s rights advocates, called the DepEd a rubber stamp for the military, which has been accused of myriad rights violations in indigenous communities.

SOS pilloried the DepEd for anchoring its decision on a report that was “full of lies.”

“By ordering the closure of schools without even verifying the wild, baseless claims of Esperon that the Salugpongan schools are teaching students to rebel, they have neglected their duty to uphold the protection of schools,” SOS said in a statement on Sunday.

Threats against lumad schools have escalated since the failure of peace talks between the government and the communist rebels in 2017, with some of the gravest threats coming from President Duterte himself.

“Get out of there. I’ll have those bombed, including your structures,” Mr. Duterte said in 2017. “I will use the Armed Forces, the Philippine Air Force. I’ll really have those bombed because you are operating illegally and you are teaching the children to rebel against [the] government.”

Malacañang later issued a tamer warning, but SOS alleged that military and paramilitary groups had since taken brutal measures to force the closure of lumad schools, including making lumad destroy schoolbuildings in Davao and Compostela Valley at gunpoint.

The Alliance of Concerned Teachers (ACT), which counts the Salugpongan group Alliance of Community Educators as member, accused the DepEd of failing to safeguard lumad children from “harassment and school closures.”

“We challenge [the] DepEd to stand by its duty to civilians and resist the creeping takeover of military command over the bureaucracy,” ACT secretary general Raymond Basilio said. —WITH A REPORT FROM DJ YAP