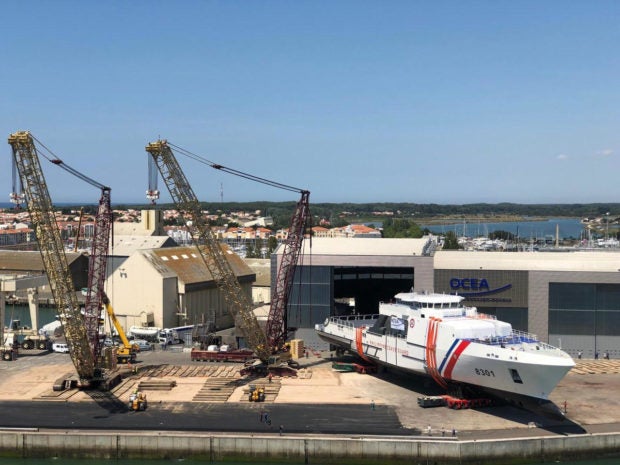 The 83.6-meter offshore patrol vessel is the future BRP Gabriela Silang, which is expected to join the service in December.

The ceremony at the OCEA shipyard in France was witnessed by PCG officials led by its commandant Admiral Elson Hermogino and representatives from the Department of Transportation and Maritime Industry Authority.

It is also capable to respond in marine environmental pollution like oil spills. It is also complemented with two 9-meter rigid hull inflatable boats with a speed of 40 knots.

The vessel can accommodate a helicopter on its flight deck. It has a maximum speed of not less than 20 knots, a travel range of up to 8,000 miles, and a sustained operational presence of up 22 days. It is not only the first offshore patrol vessel of the PCG but the first one in their entire inventory to use a diesel-electric engine.

Eighteen PCG personnel will travel to France in September to start training in manning the vessel. They will also serve as the sailing crew when the ship comes home to the Philippines in the first week of December.

The Philippines and OCEA signed the contract for P5.6 billion in 2014. The PCG earlier received four fast patrol boats as part of the project.

He is scheduled to visit France in September and may check out military hardware. /kga