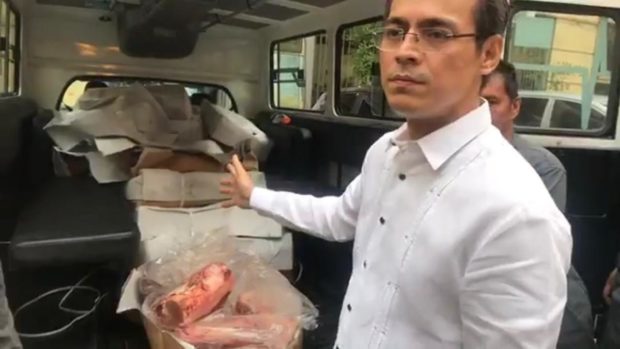 Manila Mayor Isko Moreno shows the 532 kilograms of “hot meat” seized by the Veterinary Inspection Board of Manila along Elcano Street in Divisoria on Wednesday, July 17. INQUIRER.net photo / FAYE ORELLANA

MANILA, Philippines — The Veterinary Inspection Board (VIB) seized about 532 kilograms of “hot meat” in Divisoria with an estimated amount of P79,800

Dennis Noble, meat inspector from VIB, told INQUIRER.net that the boxes of hot meat were seized around 2:15 p.m. on Wednesday along Elcano street in Divisoria after receiving a tip from a concerned citizen.

According to Noble, there were 28 boxes of hot meat. “Hot meat” means carcass or parts of a carcass of animals that were slaughtered by unaccredited meat establishments.

This raises the possibility that the meat being sold may potentially be unsafe or spoiled.

Noble added that Wednesday’s operation of the VIB against hot meat was the largest in terms of kilogram that the city government confiscated since Moreno assumed office on July 1.

Noble also said that no one was arrested from the said operation.

“Walang lumutang na may ari, mahirap naman na yung worker lang yung kunin kasi syempre nagta-trabaho lang rin,” he said, adding that the VIB even gave the owner of the hot meat a grace period to appear but no one appeared.

Moreno, for his part, warned sellers of hot meat products to stop their illegal trade and to consider the health of the people.

Moreno has ordered the VIB to feed the confiscated hot meat to the animals located at Manila Zoo. /jpv