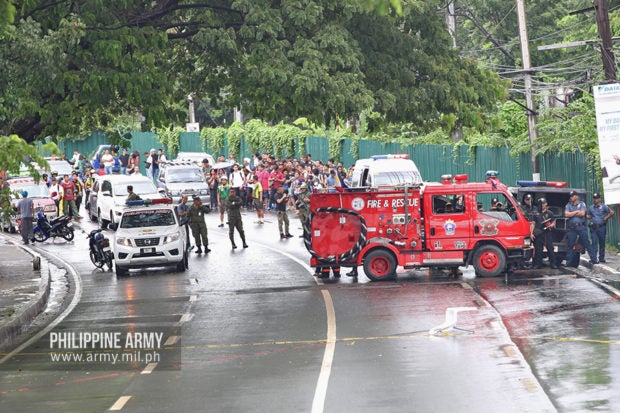 Photo courtesy of the Philippine Army

MANILA, Philippines — An abandoned motorcycle outside the gate of the Philippine Army headquarters caused an alarm on Wednesday, prompting the response of the military’s bomb sniffing K-9 unit.

The suspicious motorcycle was found at about 12 noon at the gate of the Philippine Army Wellness Center along Lawton Avenue in Taguig City, said Army spokesperson Lt. Col. Ramon Zagala.

This prompted the Military Police Battalion to cordon off the area while the K-9 Battalion sent its working dogs to find out if explosives may be present.

Zagala said that the bomb-sniffing dogs appeared to have sniffed out “traces of explosives,” causing them to conduct water disruption.

The cordoned area was later re-opened to traffic but it remains unknown who left the motorcycle at the gate of the military camp. /jpv