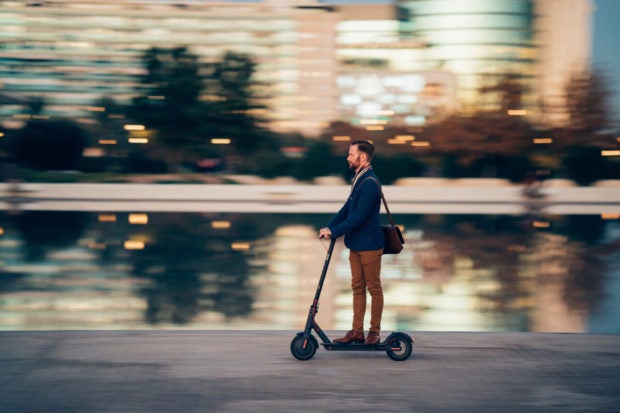 New research has found that injuries from using motorized scooters have increased in recent years. Image: iStock/martin-dm via AFP Relaxnews

New research from the United States found that the increasing trend for using electric scooters to zip around cities appears to be linked with an increase in facial and head injuries caused by accidents while riding.

The team gathered data from between 2008 and 2017 to analyze the types and frequency of head and facial injuries caused by motorized scooters. During this period, the use of the scooters increased greatly, partly due to people looking for more environmentally friendly but also effective alternatives to cars and other vehicles.

The findings, published in the American Journal of Otolaryngology, showed that head or facial injuries sustained from electric scooter use tripled, increasing from an estimated 2,325 injuries nationwide in 2008 to an estimated 6,947 in 2017.

The most common injury was a closed head injury, such as concussion and bleeding or bruising of the brain at 36.1%, followed by facial cuts or abrasions at 20.5%. Around 5% of injuries were facial fractures, most often in the skull or nose.

The researchers also found that many people are being injured from not wearing helmets, with 66% of those injured failing to wear one in records where helmet use was recorded.

The study also found that helmet use increased with age, with around 19% of toddlers wearing a helmet compared to about 67% of seniors.

“Children use motorized scooters marketed as toys but in reality, certain models can reach speeds of almost 30 miles per hour,” said co-author Amishav Bresler, adding that laws regarding motorized scooters and helmet use vary significantly from state to state.

“The U.S. should standardize electric scooter laws and license requirements should be considered to decrease the risky behaviors associated with motorized scooter use,” said Bresler, who noted that legislation in other countries had successfully reduced the number of injuries. “In 2000, Italy implemented a law mandating helmet use for all types of recreational scooter drivers-legislation that reduced head trauma in scooter riders from about 27 out of 10,000 people before the law passed to about 9 out of 10,000 people afterward.” HM/JB