De Lima: Priest named in ‘Oust Duterte’ might be just a victim of Bikoy’s lies 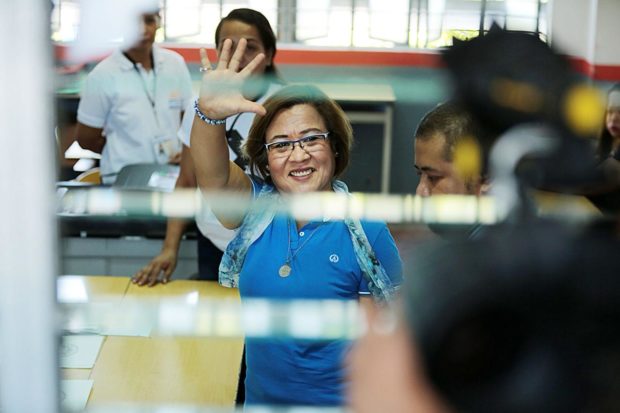 MANILA, Philippines — Father Albert Alejo, who was tagged in an alleged plot to overthrow the President, might just have been one of the victims of “Bikoy’s” lies, Senator Leila de Lima said on Tuesday.

The senator, a staunch critic of President Rodrigo Duterte, added that painting Alejo as part of the supposed ouster plot was “unfair.”

“Paring Bert is yet to speak up on this allegation against him, that’s why I find it unfair that he is [being] painted in a bad light as he continuously fights for what is true and just,” she said.

A man named Peter Joemel Advincula, who earlier claimed to be the hooded narrator in the controversial “Ang Totoong Narcolist” videos, initially went into hiding but eventually surrendered to police last week.

Advincula had claimed that allegations made against relatives and allies of President Rodrigo Duterte in the series of videos were lies orchestrated by the Liberal Party and Senator Antonio Trillanes IV.

Advincula said that Alejo introduced him to Trillanes.

Trillanes recently admitted that Advincula had approached him through priests last year.

But the senator did not identify the priests who brought Advincula to him.

De Lima, meanwhile, pointed out that it is the moral duty of men of the church to assist individuals seeking their refuge, especially those who fear for their lives.

De Lima further noted that Alejo, who is one of her spiritual advisers and a personal friend, is “someone who is willing to sacrifice himself and his safety to uncover the truth and save Filipinos from imminent danger.”

The opposition senator also reiterated that the only way to know the truth behind Advincula and his claims is to use “reason and discernment” and to dig deeper.

De Lima had earlier denied having any links with Advincula, saying that she and her staff members has never “met or talked to him, or otherwise dealt with him.” (Editor: Jonathan P. Vicente)