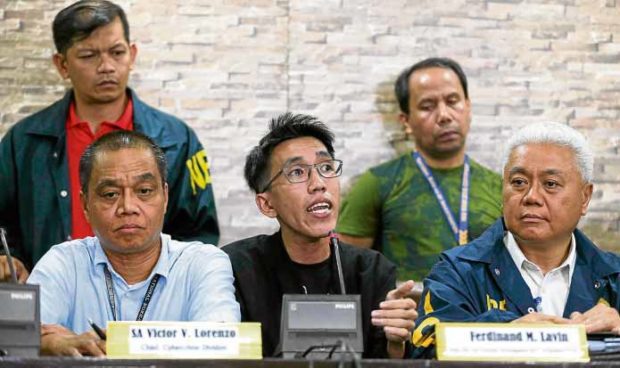 I AM NOT ‘BIKOY’ Rodel Jayme, the administrator of metrobalita.net (middle, seated), speaks to reporters during a press briefing at the NBI headquarters in Manila on May 3, 2019. The so-called “Bikoy” videos were uploaded in the website. —RICHARD A. REYES

MANILA, Philippines — The administrator of website metrobalita.net, which first shared the “Ang Totoong Narcolist” videos, on Tuesday pleaded “not guilty” on the inciting to sedition case filed against him by the justice department.

The Department of Justice charged Rodel Jayme before a Parañaque court with inciting to sedition in relation to Republic Act 10175 or the Cybercrime Prevention Act for the publication of the controversial video that tagged some members of President Rodrigo Duterte’s family and aide to the illegal drug trade.

To recall, Jayme’s website was not only shut down for being the alleged primary sharer of the Ang Totoong Narcolist videos as it was also included in one of the matrices of lawyers’ groups and media organizations, among others, allegedly plotting to unseat Duterte. The matrices were presented by Malacañang.

But Jayme has denied involvement in the alleged oust-Duterte scheme. He said he merely fulfilled his job of setting up the website. He said he was paid to do so.

He also said he is willing to become a government witness to identify people behind the controversial videos. (Editor: Katherine G. Adraneda)