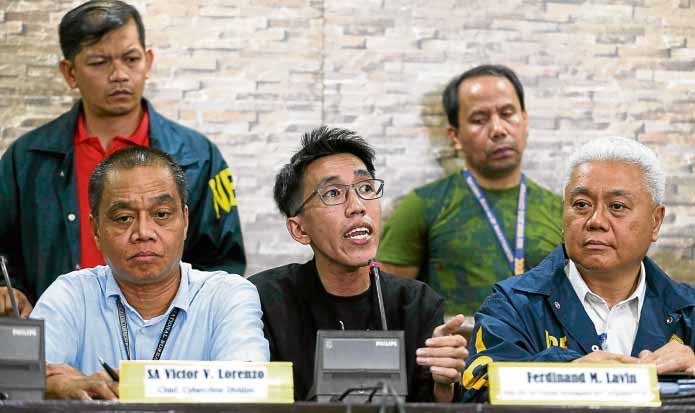 I AM NOT BIKOY’ Rodel Jayme, the administrator of metrobalita.net (middle, seated), speaks to reporters during a press briefing at the NBI headquarters in Manila on Friday. The so-called “Bikoy” videos were uploaded in the website. —RICHARD A. REYES

The man responsible for putting up the website that launched the first of a series of videos linking members of President Duterte’s family and his associates to the drug trade on Friday said he was willing to cooperate and unmask those who had paid him to do the job.

The National Bureau of Investigation, which took 27-year-old Rodel Jayme into custody and filed an inciting to sedition charge against him, said he could serve as a state witness in the case.

Jayme admitted that he created the website metrobalita.net that uploaded the first of a five-part video series on the “The Real Narcolist” (Ang Totoong Narcolist) featuring a hooded man named “Bikoy.”

He said, however, that he was unaware who had uploaded the video as he wasn’t then in control of the website.

No links to LP

“I can point to those who made me do it,” he said, adding that he got paid P2,500 to build the website early this year by a woman he identified as Maru or Mary Nguyen.

He said he met Nguyen when they both served as volunteers in the campaign of Liberal Party (LP) presidential candidate Mar Roxas in 2015.

“Of course I fear for my life. But now that I am in the custody of the NBI, I feel more safe,” he said. “As I said, I am cooperating because I have good intentions. I do not have bad intentions against anyone, especially our President and his loved ones.”

Jayme, however, denied any links to the LP or Vice President Leni Robredo.

The NBI said Jayme could be used as a state witness but he must first be charged criminally.

“If he continues to spill the beans and participate in the investigation, and if we prove that his involvement does not go beyond merely creating the website, he can qualify as a state witness,” NBI spokesperson Ferdinand Lavin said.

The videos were “designed to sow hatred against the government” and the NBI obtained “revealing” chat messages that made Jayme’s role in sharing the videos apparent, justifying the inciting to sedition charge against him, Lavin said.

“I am not Bikoy. I was not the one who uploaded the videos on the website, on Facebook, on YouTube, even more so the one who spread the videos,” Jayme said.

“I was only trying to make a living,” he said.

Roxas, who is running for senator, denied the LP’s involvement with the Bikoy videos.

Campaigning in Legazpi City on Friday, he said his party had “no such activities.”

Other opposition members said the government should first look into the veracity of allegations by Bikoy and sacked Police Col. Eduardo Acierto regarding the involvement of members of the Duterte family and their associates in the drug trade before prosecuting anyone.

Detained Sen. Leila de Lima said the Department of Justice (DOJ), the NBI and other law enforcement agencies must determine if there was truth in the claims made by Acierto and Bikoy instead of running after their supposed handlers.

“Fix your priorities, guys. Fulfill your true mandate,” De Lima, a former justice secretary, said in a statement from her detention cell in Camp Crame.

“Yours is the sworn duty to protect the interests of the Filipino people, not of one man or one family and their associates,” she said. “Truth is paramount. Do not suppress it. The people deserve to know the truth.”

Sen. Antonio Trillanes IV said Justice Secretary Menardo Guevarra should go easy on individuals allegedly behind the videos on YouTube “lest he himself be suspected of protecting drug lords.”

“Guevarra must first investigate and disprove the allegations of both Acierto and Bikoy before he could say that their statements are untrue,” Trillanes said.

Sen. Francis Pangilinan, the LP president, said the Duterte administration’s attempt to link his party to the spread of the Bikoy videos was just a means to sway public attention from its recent blunders and failure to protect the country’s interests in the West Philippine Sea.

He said the government should instead focus on addressing the daily concerns of Filipinos, such as providing better-paying jobs and more affordable supply of water and electricity.

“What’s the truth? It’s also during the election when they claimed that they will eradicate illegal drugs in ‘in three to six months,’” Pangilinan said, referring to Duterte’s 2016 campaign promise.

“What’s the truth? No syndicate member has been sentenced for the several tons of ‘shabu’ (crystal meth) worth billions of pesos that passed through the (Bureau of) Customs,” he added.

Presidential spokesperson Salvador Panelo declined to say whether the LP was behind the viral videos but accused the opposition party of using them for propaganda.

“They contributed to the intrigue by using that as a propaganda. Ever since, we’ve been saying that it is black propaganda, that’s why we’ve been ignoring it,” he said.

He said the police agencies would naturally look for those behind the videos that accused members of the President’s family of involvement in the narcotics trade.

“It’s their job to look for those behind crimes,” Panelo said.

Jayme said he was told that the website he created would be used to upload videos for Nguyen’s preferred candidates in the 2019 midterm elections.

He claimed he did not know the candidates she supported, or the content that eventually ended up on the website.

“That was not part of the deal,” Jayme said. “Our agreement was that I would craft and put up the website. I then allowed her access to the domain. After that I stopped accessing it.” —WITH A REPORT FROM REY ANTHONY OSTRIA