Bar topnotcher found calling after being bullied as a kid 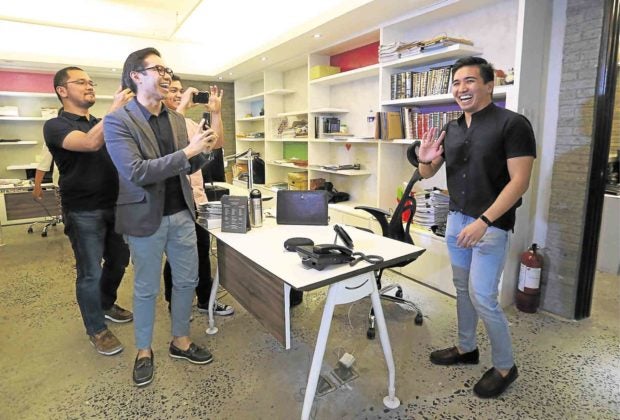 SEVENTH HEAVEN Colleagues celebrate the arrival of Sean James Borja (right) as the 2018 bar topnotcher showed up on Friday afternoon at Gulapa Law Office in Makati City, where he has worked since January. —LYN RILLON

Bullied in grade school for being openly gay, Sean James Borja used his experience as a takeoff point for a career in law.

“I thought I could be the voice for people who need a voice,” said Borja of Ateneo de Manila University, this year’s bar topnotcher with a grade of 89.3 percent.

Borja is among the 1,800 bar passers of the annual licensure exam for lawyers that saw three top-performing law schools regain their dominance over the topnotchers’ list.

A relatively young law school also broke into the Top 10.

Ateneo de Manila University, University of San Carlos (USC) in Cebu City and the University of the Philippines (UP) produced nine of the 10 highest scorers in the 2018 bar exams, while De La Salle University-Manila (DLSU), whose law school was established only in 2010, contributed another topnotcher.

Despite the scorching heat, the Supreme Court along Taft Avenue, Manila, teemed with people on Friday to check the exam results on a giant video screen set up on the court’s compound.

Being a lawyer is “about being able to provide a voice to those who don’t necessarily have it, in the sense that not everyone might have the courage or the bravery to speak up on what their rights are or what they want,” Borja said in a TV interview, referring to the LGBT community.

In Cebu City, Natu-el recalled praying inside San Pedro Calungsod Chapel while waiting for the results of the bar exams.

When he got home close to noon on Friday, he got word that he didn’t only pass the bar, he also got the second highest score in what has been considered the toughest licensure exam in the country.

The son of a retired police general said he did not expect to be a second placer in the bar exams.

“God blessed me and put everything in order,” said Natu-el, who credited USC for having taught its students to strive for excellence.

“The best preparation starts from the time you get to law school. I made sure I learned and understood everything. I listened to our teachers; it was their voices telling me the answers,” he added.

To date, USC, the oldest university in Cebu and one of the top-performing law schools in the country, has produced at least 29 top placers in the bar exams.

Natu-el, a certified public accountant, said he was inspired to take up law by his grandfather, who is also a lawyer.

“There is a need for ethical lawyers in the country,” he said.

Added his fellow topnotcher Badayos, a champion debater at USC: “We live in trying times. We have [many] reasons to uphold the rule of law.”

Pita echoed their sentiment: “I want to learn more about the law, be able to join public service and fight for what is right.”

In Lucena City, opposition senatorial candidate and 1999 bar topnotcher Florin Hilbay called on the new lawyers to “defend civil rights, human rights, freedom of the press and the right of everybody to life.”

Former Quezon Rep. Lorenzo “Erin” Tañada III also urged the bar passers to “[take] at least one pro bono case a month. A lot of [human rights violation] victims out there are indigents who need dedicated lawyers to defend their rights trampled on by the Duterte administration,” he said.

Tañada also consoled bar flunkers and said that he himself took the bar thrice before passing it.

“Failing is not the end of the world. It’s what you do after that will define your character … Fight!” he tweeted.

In Malacañang, presidential spokesperson Salvador Panelo urged the country’s latest batch of lawyers to “consider pursuing a career in government,” as “their youth, idealism, academic competence and personal integrity are welcome under the present administration.” —WITH REPORTS FROM JULIE M. AURELIO, ADOR VINCENT MAYOL AND DELFIN T. MALLARI JR.