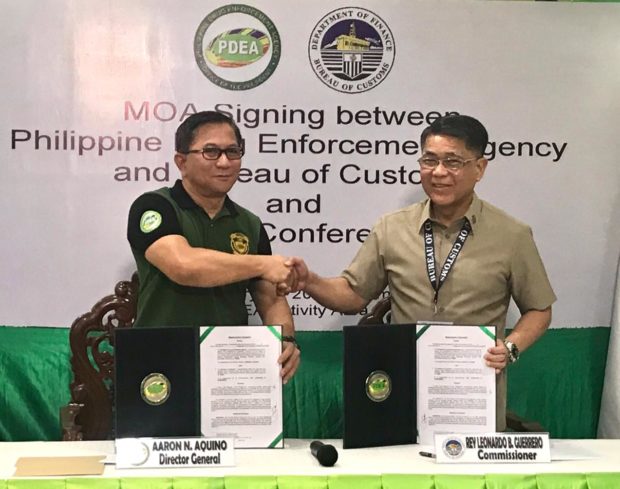 MANILA, Philippines — The coordination between the Philippine Drug Enforcement Agency (PDEA) and the Bureau of Customs (BOC) in terms of intercepting illegal drug packages is more solid and faster now, the spokesperson of the country’s anti-illegal drug agency said on Wednesday.

Both Aquino and Guerrero — the former Chief of Staff of the Armed Forces of the Philippines — graduated from the Philippine Military Academy (PMA).  Aquino was part of the Sangdiwa Class of 1985 while Guerrero came from the Maharlika class of 1984.

Carreon said that this was evident in a recent operation where BOC was able to intercept a shipment from China containing shabu worth P1.8 billion within just hours of receiving reports from PDEA.

“And by after lunch somewhere around 3 p.m. of that same day, na-identify at nabuksan ‘yong container van at na-isolate po natin doon.  Out of the 46 sacks, na-isolate ‘yong 12 through x-ray na […] containing illegal drugs,” he added.

Guerrero replaced former Commissioner Isidro Lapeña in October 2018.  Lapeña, himself a PMA graduate from the Maagap Class of 1973, was then appointed by President Rodrigo Duterte as director general of the Technical Education and Skills Development Authority (TESDA).

Lapeña’s stint at BOC was marred with several issues, including the controversial shabu hidden inside magnetic lifters that slipped through the authorities’ watch.  According to PDEA, the total amount may be more than a ton of shabu worth around P6.8 to P11 billion.

Meanwhile, Carreon urged the people to move on and allow the government to rid the streets of drugs, leaving the issue on the magnetic lifters for the courts to decide.

“Right now sir this is all about moving forward, with better coordination to show the Filipino people that we are really serious dahil may problema nga po tayo regarding sa pagpasok ng bulk supply ng droga, kumbaga we have a long way to go,” he added. /jpv