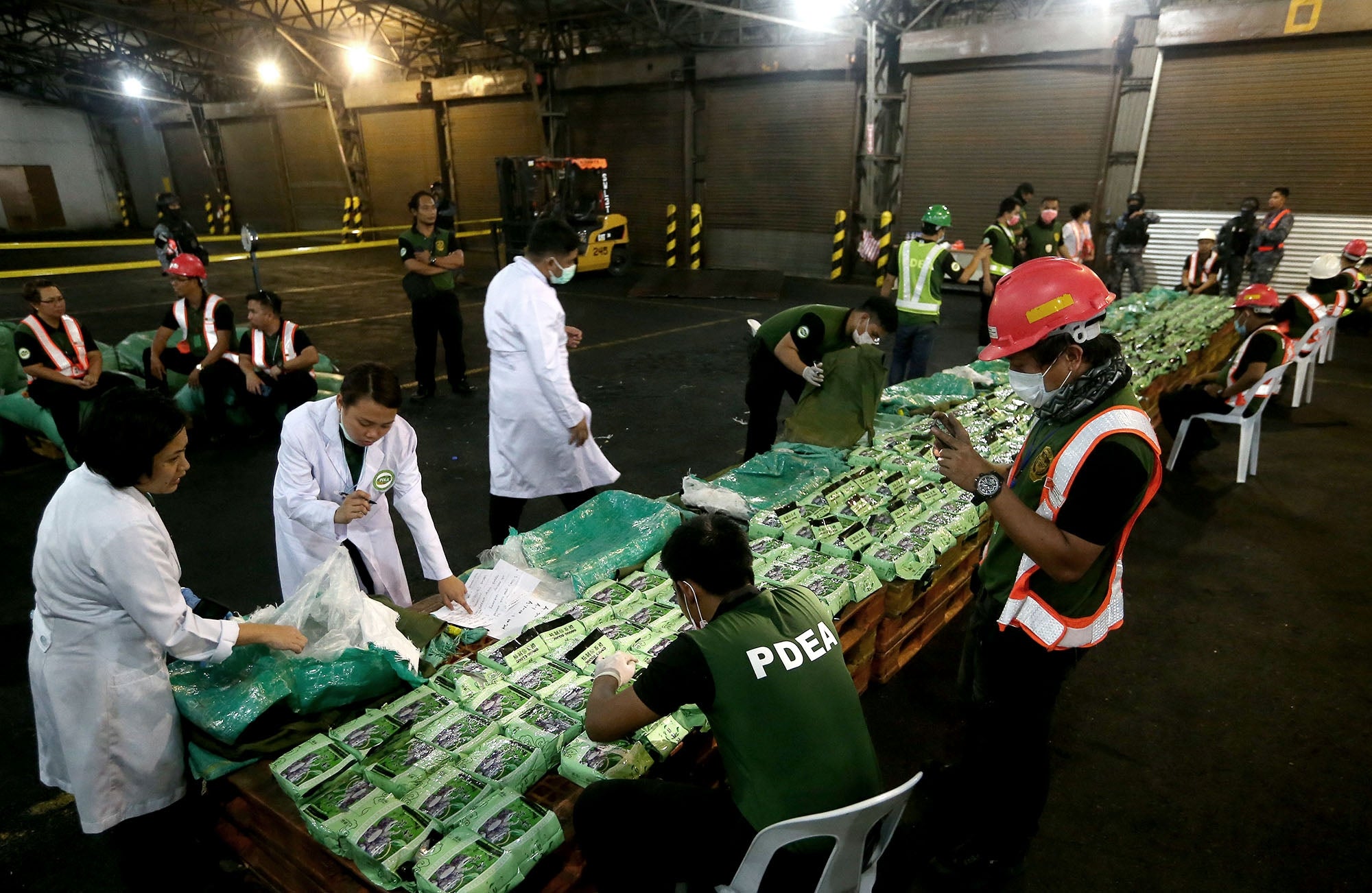 MISDECLARED POISON PDEA laboratory technicians take out for inventory 276 1-kilogram packs of “shabu” (crystal meth) from sacks declared by its consignee as plastic resin that were seized at Manila International Container Port on Friday night. —RICHARD A. REYES

The absence of the death penalty emboldens Chinese drug traffickers to flood the Philippines with narcotics because they believe they “can buy anybody” and return home safely, Philippine Drug Enforcement Agency (PDEA) Director General Aaron Aquino said.

The country’s chief drug buster made the statement on Friday night after authorities, thanks to a tip from Vietnam, seized an estimated P1.8 billion worth of “shabu” (crystal meth) shipped to Manila International Container Port (MICP) by a suspected Chinese syndicate.

Aquino said arrested Chinese drug traffickers were unafraid to carry out their activities here because they knew they would not pay with their lives if caught.

“[T]hey will continue to smuggle drugs [because] they can buy anybody—judges, prosecutors even law enforcers—and return to their country safely,” he said at a press briefing.

Aquino said information provided by the PDEA’s Vietnamese counterpart enabled agents, in coordination with the Bureau of Customs, to intercept the shipment of 276 kilograms of shabu that arrived at MICP on Sunday.

The shabu was stuffed in 1-kilogram tea packs and believed to have been manufactured by the same Chinese drug syndicate whose 166 kg stash was seized by antinarcotics agents on Tuesday at posh Ayala Alabang village and at a shopping mall at Barangay Alabang in Muntinlupa City.

On Wednesday, Vietnamese police seized 300 kg of shabu and arrested 11 suspects in a buy-bust operation in Ho Chi Minh City. Eight of the suspects were Chinese nationals.

According to Aquino, authorities in the city, formerly known as Saigon, learned from the Chinese suspects that a huge shabu shipment was also sent to Manila.

Erastus Sandino Austria, the bureau’s spokesperson, said they were still trying to get more information on the consignee, a company he described as a “relatively new” in its dealings with customs.

Aquino said the shabu they seized on Friday were in packages similar to those recovered in Vietnam. The Manila shipment was falsely declared as plastic resin.

The shabu, contained in 12 sacks, was hidden among nearly 500 sacks of resin that came from Ho Chi Minh City.

In a phone interview on Saturday, Aquino said there was a “big possibility” that the drug haul at Ayala Alabang had also passed through the country’s seaports.

He said the PDEA was “backtracking” the investigation to determine the customs broker involved in the shipment.

“This strengthens our assessment that what we seized [at] Ayala Alabang was indeed the doings of the ‘Golden Triangle’ drug syndicate. The same seizures were made in Malaysia, Myanmar, Vietnam, Laos and Thailand. It’s all the same,” Aquino said.

Two other Chinese — Kei Kei Go, 40, and Kian Kok Chua, 43 — and their Filipino interpreter, Emmanuel Pascual, 79, were arrested in a buy-bust operation at a shopping mall in Barangay Alabang.

Aquino said the 166 kilograms of shabu, the second largest drug haul this year, might have been smuggled from the “Golden Triangle” region that includes parts of Laos, Myanmar, Thailand and southern China where syndicates manufacture drugs.

President Rodrigo Duterte has said he wants Congress to work for the reimposition of the death penalty to serve as a deterrent against drug crimes.

The 1987 Constitution abolished the death penalty but it was reintroduced in 1993 during the term of former President Fidel V. Ramos.

Drug lord Lim Seng was the last Chinese to be meted the death penalty in the country. On the morning of Jan. 15, 1973, Lim was led out of his cell at Camp Crame, Quezon City, and executed by a firing squad at Fort Bonifacio in Taguig City.