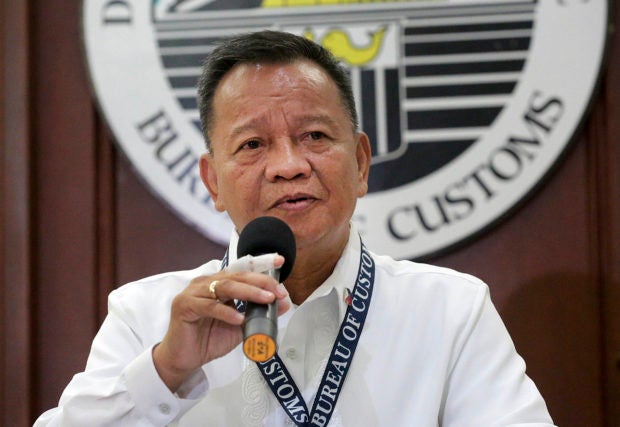 Bureau of Customs Commissioner Isidro Lapeña contradicted on Thursday the newest claim of the Philippine Drug Enforcement Agency (PDEA) that the four magnetic lifters found in Cavite could have contained P11-billion worth of “shabu.”

“I don’t know where the P11 billion [figure] was taken, of course it’s coming from PDEA. ‘Yung if we will just look at the four empty containers, hindi yun mag-result ng P11 billion. Even less than one ton, kahit kalahating ton, that’s very serious,” Lapeña said in a Palace briefing.

The PDEA on Thursday said the total price of the shabu allegedly smuggled through Customs went up to P11 billion from its first claim of P6.8 billion.

He said he was not convinced with PDEA’s newest figures.

“It is speculation,” he added. “Yung arithmetic, we have to do some computation dito. Yung sasabihin mo na more than 1,000, do the arithmetic and you will not arrive at 1,000.”

Lapeña, who initially doubted that the magnetic lifters contained shabu, said the BoC was serious with going after the smuggled drugs.

“We take that very seriously, that’s why we have to concentrate our efforts on the drug syndicate and go after shipment,” he said.

“Yung nakalusot is something we take very seriously, to improve ‘yung mga procedures namin as well as the equipment,” he added.

After the briefing, Lapeña met with Executive Secretary Salvador Medialdea to show his report regarding the alleged shabu shipment. /je