‘I feel like I’m dreaming,’ Revilla says on his acquittal 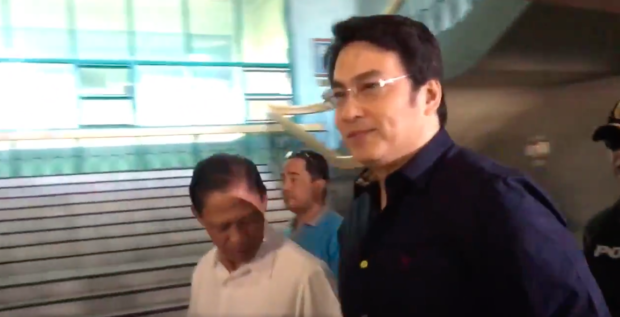 An emotional Ramon “Bong” Revilla Jr. said this on Friday after leaving the Custodial Center at the Philippine National Police (PNP) headquarters in Camp Crame.

The former senator was released because the Sandiganbayan’s First Division acquitted him of plunder in connection with the P10-billion pork barrel scam.

Revilla also said he missed almost five years of his life after being detained for a long time.

He also acknowledged God for supporting him and also thanked his family for giving him strength.

“Pero ganun pa man ang aking pasasalamat dahil sa tulong ng Panginoon at sa tulong ng aking pamilya kung baga sila ay nagbigay ng tibay sa akin [But then again, I am thankful for the help of God and the help of my family for giving me strength],” he said.

Meanwhile, Revilla’s wife Bacoor Mayor Lani Mercado, who accompanied Revilla on the way out of detention, expressed happiness as her husband may now come home after so many years.

“Sino bang hindi ngingiti nang hanggang tenga? Eh, eto na yung pinakahinihintay namin—  makakabalik na sa bahay namin ang aming gwapong asawa (Who could not smile after this? This is the moment we have been waiting for — for my handsome husband to come home),” she said.

Since 2014, Revilla has been detained at the PNP Custodial Center in Camp Crame, Quezon City. /jpv

Read Next
BFP: Fire destroys houses in Tondo
EDITORS' PICK
DILG to stranded workers: ‘Stay where you are’ until Luzon-wide quarantine is over
DILG says middle class will also get govt aid during Luzon-wide quarantine
IATF: Food firms to operate with 50% of workforce during Luzon quarantine
UP-PGH wards for COVID-19 patients finished in 5 days
Cebu City closes its borders
Style and music journeys with Claudia Barretto
MOST READ
Locsin blasts DOH for blocking entry of Chinese doctors
Another doctor dies due to COVID-19 in Cebu City, doctor-husband critical
DOH pressed to expand, speed up virus testing
No more bread? Company forced to limit production
Don't miss out on the latest news and information.