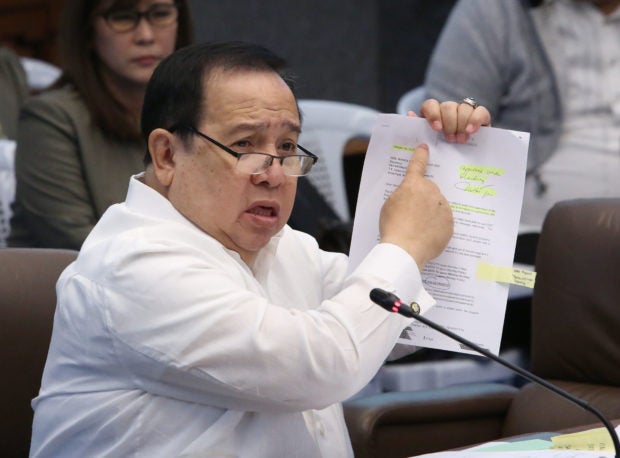 The senator vowed on Thursday during the joint hearing of the Blue Ribbon and Public Works committees to continue investigating the falsifications of titles happening in the country.

“The Torrens system of this country is in peril so we have to continue. We will make a preliminary report and we will continue also investigating all the falsification of land titles, the faking of land titles,” Gordon, the chairman of the Blue Ribbon Committee, said.

“The Torrens system is the bedrock of our system when it comes to land transactions. Kapag ‘yan pinabayaan natin, ‘pag iyan niloko at winaldas, walang maniniwala sa mga papeles ng Pilipino [If we disregard that, if that can be deceived and misappropriated, no one will ever believe in the documents of Filipinos],” Gordon added.

The Torrens system is a land registration system wherein the government keeps all the legitimate land titles and records.

In previous hearings, it was revealed that the modus of the syndicates was to manufacture land titles that were already covered by the highway and then claim for just compensation of road ROW. Using only a special power of attorney and deed of assignment, the syndicates were able to make a claim

Gordon said that the Department of Public Works and Highways (DPWH) rely on torrens system, which are handled by the regional offices of the Land Registration Authority (LRA) under the Register of Deeds.

(Whatever register of deeds given to you, if that is inferior, what will come out of the LRA is inferior as well. That is where the scam starts, especially what happened in GenSan.)

(This Torrens system has long been abused. A lot of people, rich or poor, participate in faking these titles to enrich themselves.) /jpv