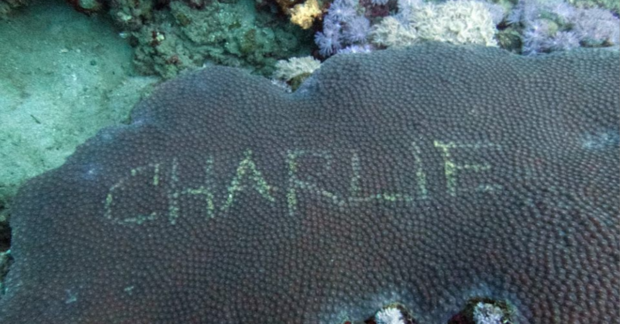 The question was on netizens’ minds after seeing the name scratched onto corals, as featured in pictures shared by Vince Tenchavez on Facebook.

Another picture shows “2018” inscribed on another coral. The post has been shared over 7,000 times as of this writing with many reacting angrily to the act.

Charlie, whoever you are, take that stick, banger, or whatever you used to write on these beautiful corals – and shove…

Tenchavez, a 34-year-old PADI divemaster, said the vandalized corals were spotted last Sunday, Sept. 23, at the house reef of Bauan Divers Sanctuary (BDS) in Batangas. The corals were 40 feet deep, so it is surmised that a scuba diver was behind the deed.

He said the vandalism might have been carried out on Sept. 22 or 23. He and other divers noticed it last weekend while participating in the International Coastal and Underwater Cleanup.

Tenchavez warned that such an act could kill corals, which usually take hundreds of years to grow. He founded a group, Scuba Hobby and Recreation Company of Divers (SHARCD), which is dedicated to the reproduction of corals through coral propagation units.

Two of the major projects the group has undertaken is growing corals on pyramids structured out of either steel bars or PVC pipes. 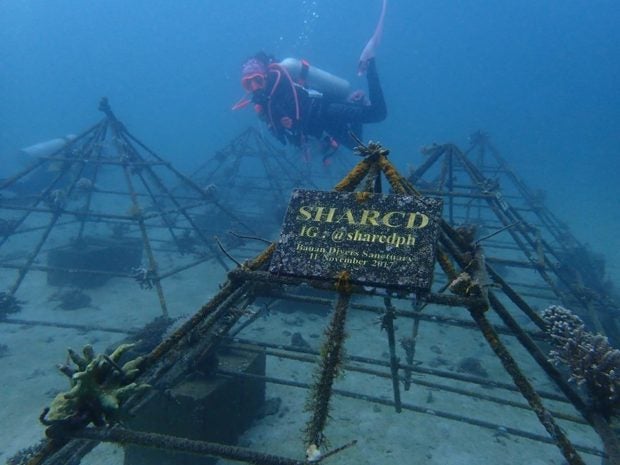 He said that BDS’ guest list was checked to identify the diver, but that no Charlie had logged in. It is assumed that the diver had come from another resort, but finding him or her poses a challenge because of the number of divers over the weekend. There is a plan to check other resorts’ guest lists to find Charlie.

Though tissue on corals could grow back after the vandalism, they could still be at risk for infection, as mentioned in a Pacific Daily News report on a case of vandalized Guam corals in 2016.

Corals could be mistaken for plants, but are actually invertebrate animals. Coral reefs serve as home to hundreds of thousands of sea species and are dubbed as the rainforest of the ocean.

Though coral reefs have lasted for tens of thousands of years, the World Wildlife Fund (WWF) states that 27 percent of the world’s coral reefs have been destroyed. It cites humankind as the greatest threat to their survival due to acts such as overfishing, careless tourism and pollution.