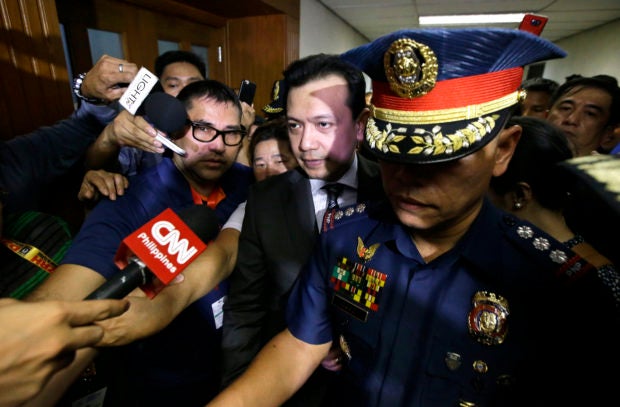 Sen. Antonio Trillanes IV was able to return to the Senate on Tuesday after posting bail at Makati City Regional Trial Court Branch 150 that had ordered his arrest for a rebellion case that was dismissed in 2011.

Before posting the P200,000 bail, Trillanes, one of President Rodrigo Duterte’s fiercest critics, submitted himself to authorities and went through booking procedures, including posing for mugshots.

Here are the events that transpired before the oppositionist senator secured temporary liberty:

On Tuesday afternoon, the Judge Elmo Alameda of Makati City RTC Branch 150 ordered the arrest of Trillanes for his role in the 2007 Manila Peninsula siege.

Trillanes had a rebellion case at Branch 150.

As the news broke out, Malacañang then asked the embattled senator to respect the decision of the Makati court and “voluntarily surrender and face the charges against him.”

“Right now that warrant of arrest is immediately executory and he should show respect to our court practices, voluntarily surrender and face the charges against him without prejudice to whatever remedy his lawyers may have for him,” presidential spokesperson Harry Roque said.

Shortly after, officers of the National Capital Region Police Office (NCRPO) arrived at the Senate to serve the warrant of arrest.

This was confirmed by Director General Oscar Albayalde, chief of the Philippine National Police, to INQUIRER.net in a text message.

“The team from NCRPO headed by COP [chief of police Senior Supt. Roger Simon] of Makati [are] now in the Senate to serve the warrant,” he said.

READ: Cops arrive at the Senate to arrest Trillanes

Trillanes then faced the members of the press at the Senate to address the issue.

[Democracy lost on this day.]

[As I said last week, our court petition is a test of our democracy and our judicial system.]

Trillanes noted that he would post a bail right after the press conference.

Around 3 p.m., he peacefully turned gave himself up to arresting authorities.

[As I said, I will go with the arresting team if they have a warrant, no matter how unjust that warrant may be.]

Trillanes, accompanied by Director Guillermo Eleazar, chief of the NCRPO, was taken to the Makati Central Police Station where he went through the booking procedure – starting with posing for mugshots.

The mutineer-turned-senator then proceeded to the Makati RTC Branch 150 where he posted his bail.

While, waiting for his bail to be processed, Trillanes still managed to taunt the President.

[I hope you’re watching the proceedings because he will go through the same thing someday.]

After successfully posting bail, Trillanes returned to the Senate, arriving past 5:00 p.m.

READ: Trillanes back at Senate after posting P200,000 bail