Trillanes to Duterte: ‘You’ll go through the same thing someday’ 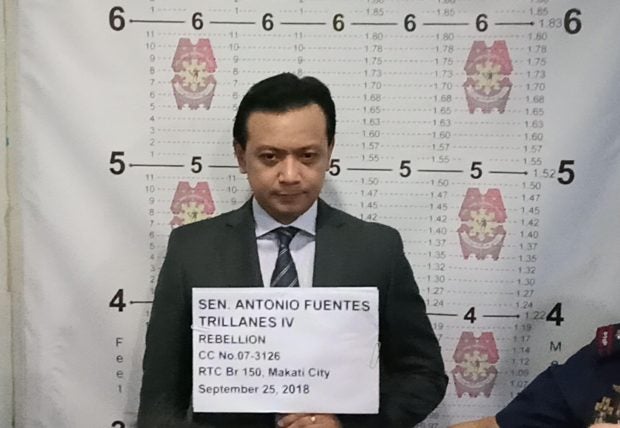 While waiting for his bail to be processed at the Makati Regional Trial Court on Tuesday, Trillanes had this message to the President: “Sana pinapanood niya yung proseso kasi balang araw pagdadanan din nya yan.”

[I hope he’s watching the proceedings because someday he will have to go through the same thing.]

Trillanes smiled as he said in response to a reporter’s question.

It was President Rodrigo Duterte who ordered the senator’s arrest after revoking amnesty granted to him by the previous administration.

The senator posted bail after Judge Elmo Alameda of Makati RTC Branch 150 ordered his arrest for rebellion in relation to the 2007 Manila Peninsula siege.

The case had already been dismissed and Trillanes was granted amnesty by then President Benigno Aquino III.

Trillanes peacefully surrendered to authorities after the warrant of arrest was served to him in the Senate.

Even before his arrest, the senator still managed to preside over a hearing in the Senate.

In fact, he even joked about his impending arrest.

“Finally, bago ako arestuhin [before I get arrested]…” Trillanes said during the hearing.

The senator also showed no trace of fear even after the media broke the news of the court issuing an order for his arrest.

Asked how he felt about his arrest, he said; “Normal lang.” /atm