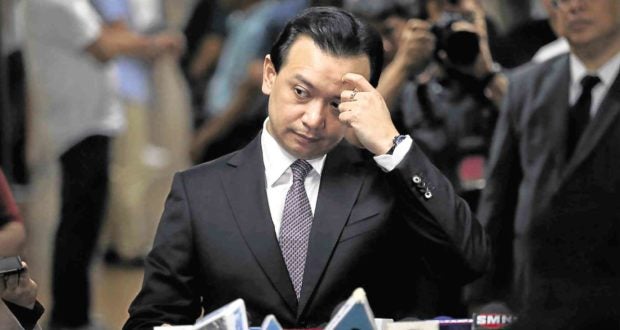 Trillanes is facing a case for rebellion before Branch 150 Judge Elmo Alameda.

However, it was dismissed following the granting of amnesty by then President Benigno Aquino III.

Early this month, President Rodrigo Duterte issued Proclamation 572 revoking the amnesty given to Trillanes for being void ab initio or void from the beginning.

Proclamation 572 says Trillanes failed to submit an application form and that he did not admit his guilt in the crimes covered by the amnesty.

With the amnesty revocation, the Department of Justice (DOJ) filed an ex-parte motion seeking a warrant of arrest and a hold departure order against Trillanes. The DOJ also asked the court to resume the trial with the prosecution presenting its evidence.

The Makati Court conducted a hearing on the DOJ’s motion where the court told Trillanes’ camp to present the filled up application form.

Trillanes, through his counsel Atty. Reynaldo Robles, however admitted that they cannot find the form.

READ: Trillanes could not find copy of his amnesty application form — lawyer 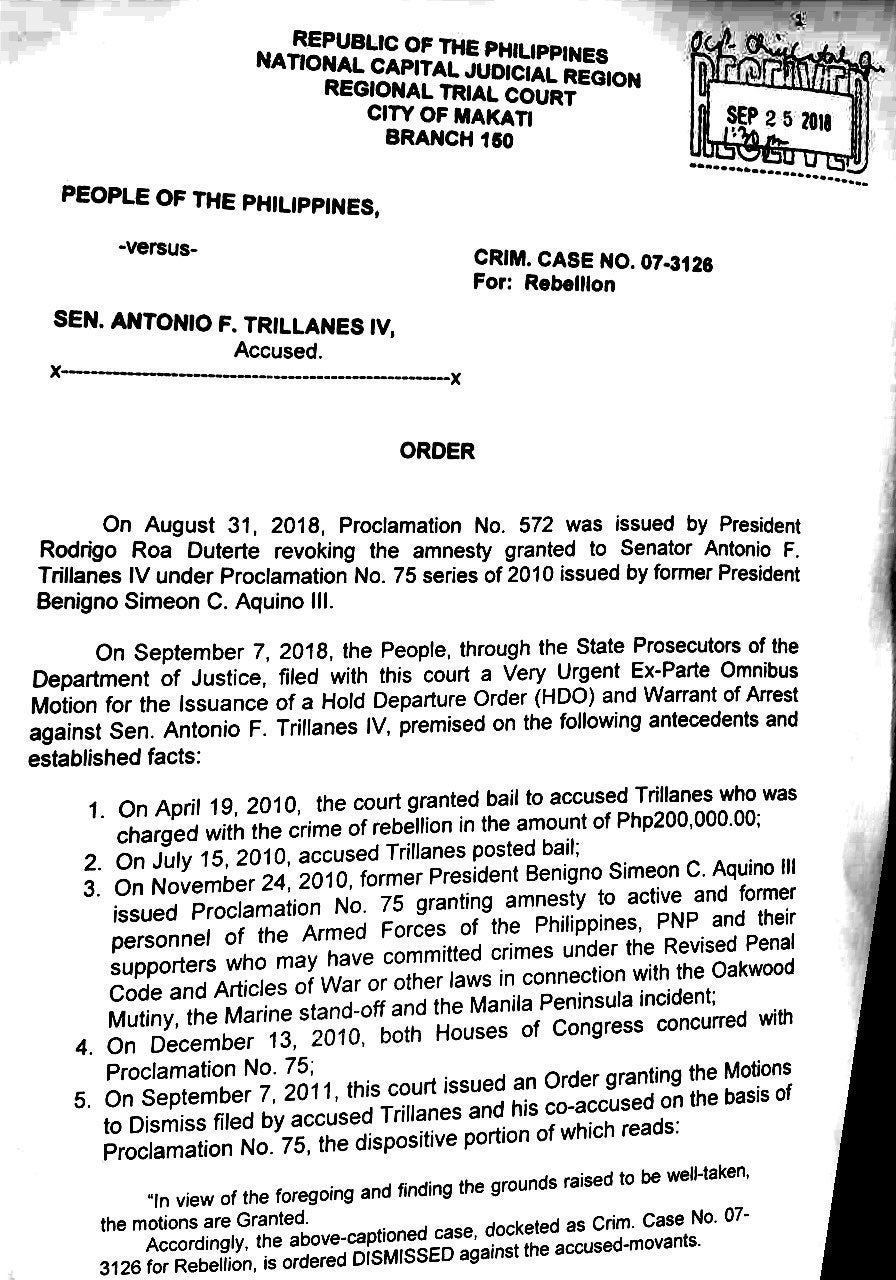 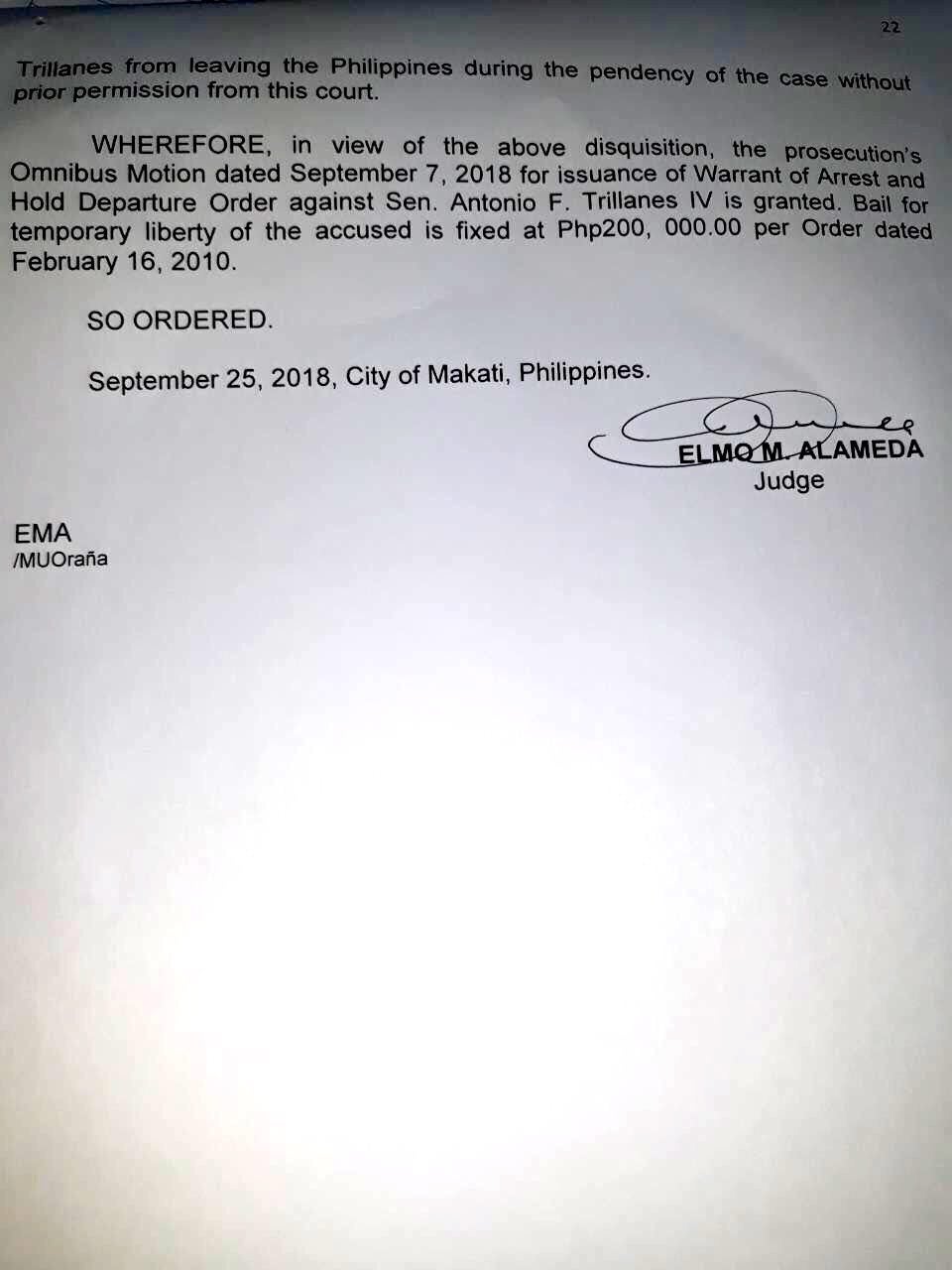 The court said secondary evidence is allowed only if it has satisfied the requirements set under the Rules on Evidence. The rules provide that the original document must be produced except when it was lost or destroyed, or if the document is too voluminous that examining it will be wasted or if the document is being offered against the person who has it in his or her custody.
“Senator Trillanes thru his counsel failed to convince this Court that he indeed complied with the minimum requirement to personally fill-up and file the official amnesty application form,” the court said.
The court also said that an evaluation of the certification issued by Lieutenant Colonel Thea Joan Andrade which stated that there is no copy of Trillanes’ application for amnesty in their records “confirms the claim of the prosecution” that no application for amnesty was filed.
The DOJ said that with the amnesty declared as void from the beginning, the dismissal of the case is also void.
The court ordered Trillanes to post P200,000 bail for his temporary liberty.
“Bail for temporary liberty of the accused is fixed at P200,000 per order dated February 16, 2010,” read the court’s order reviving its order issued prior to the dismissal of the case in 2011.
At the same time, the court issued a hold departure order against the Senator.

The court said Trillanes is prohibited “from leaving the Philippines during the pendency of the case without prior permission  from this court.”  /muf