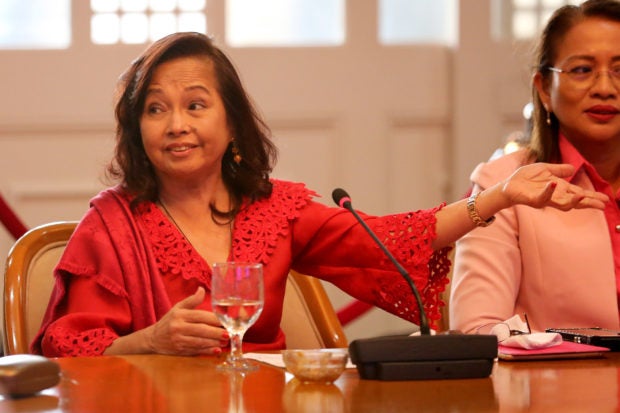 The House of Representatives will continue with its marathon, until-dawn plenary debates on the proposed P3.757-trillion 2019 budget to pull off the budget approval by October, House Speaker Gloria Macapagal-Arroyo said Tuesday.

The lower chamber’s plenary have been working until dawn over the past days to finish the scheduled deliberations for various government agencies.

“Well, it’s a decision to be able to comply with our legislative calendar that we have set together. We wanted to pass the budget bill before we go off on recess so we can pass it to the Senate and they can finish it on time for signing before the end of the year,” Arroyo told reporters in an interview after emerging from a justice panel hearing.

The House leader said there was nothing strange about this and that most of the lawmakers wanted this setup to avoid holding sessions on Thursdays and Fridays, in preparation for the upcoming filing of candidacy for the 2019 polls on Oct. 11 to 17.

“We used to have budget sessions Thursdays and Fridays but they don’t want to have session on Thursday and Friday because we are nearing the period of filing of candidacy, many discussions are now going on in the districts and so I said that’s fine with me,” Arroyo said.

According to the latest schedule, the floor deliberations on the 2019 budget will last until October 3, to be followed immediately by the period of amendments.

Majority Leader Rolando Andaya, Jr. earlier said the controversial P51.8 billion infrastructure budget that was realigned to various agencies would be itemized into specific state projects at this point. /cbb

View the budget defense schedule of the remaining departments here:

P51.8B ‘insertions’ given to past House leadership allies? Some solons think so

Solons wary realigned P51.8B will end up as ‘pork’ for Arroyo allies