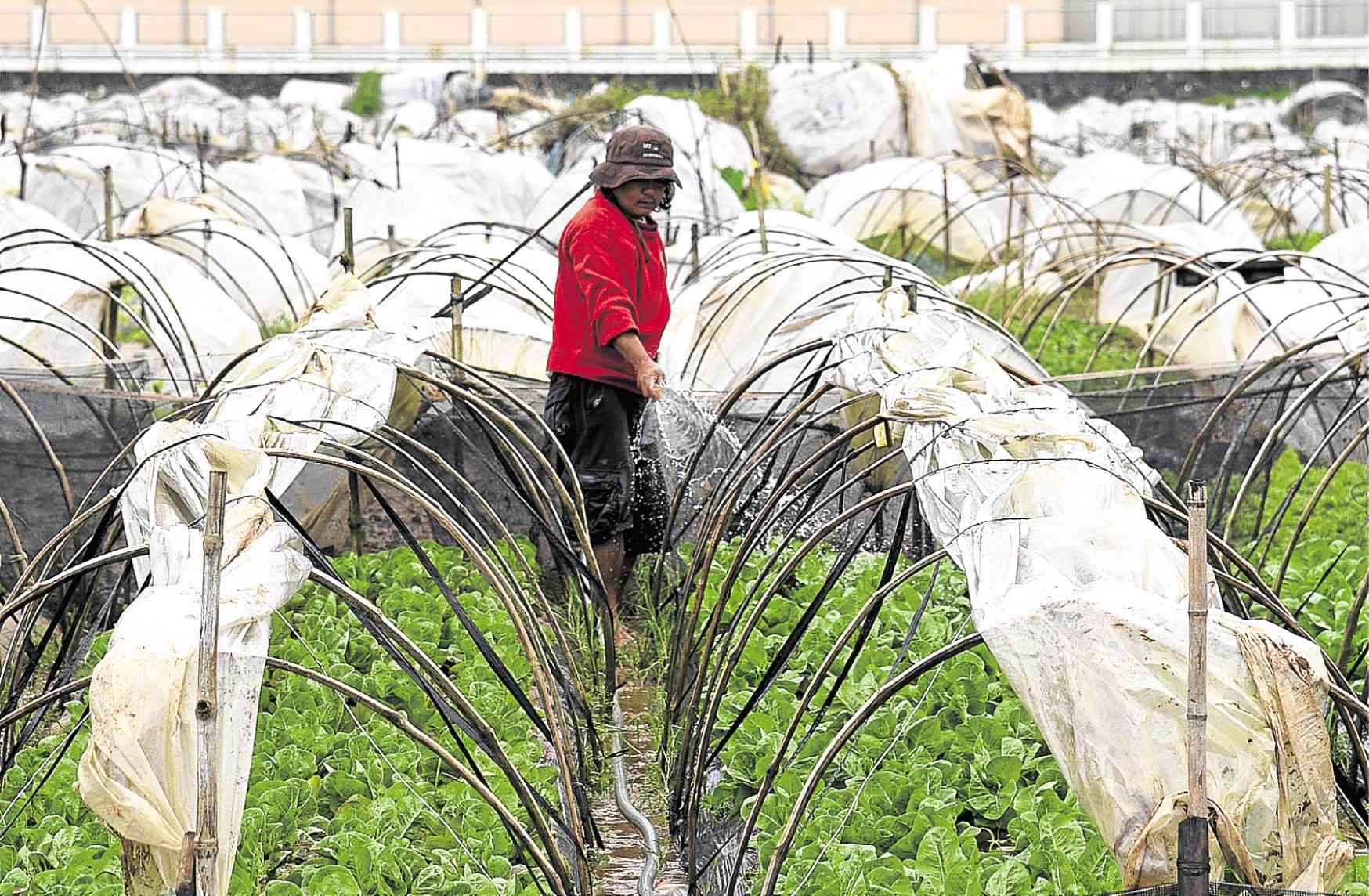 But her strawberry saplings and funnel-shaped gardens were destroyed as heavy rains turned farms, including the strawberry fields at Barangay Betag here, into a huge lagoon.

The weather bureau recorded 760 millimeters of rainfall in nearby Baguio on Saturday, more than the summer capital’s monthly average of 550 mm.

Many farmers were not as fortunate as Acop. A strawberry gardener, Mary Orlando, was unable to harvest her lettuce and what remained of it were destroyed by flood.

Orlando is among the 115 farmers who lost P1.27 million worth of crops due to the typhoon, according to the provincial agriculture office.

The two farmers and the rest of gardeners in Benguet have started repairing their farms to save or replant vegetables in the aftermath of Ompong.

“We could no longer salvage lettuce, like other leafy crops, but some strawberry saplings can be replanted,” Orlando said.

September marks the start of planting season for most strawberry farmers, so the floods have damaged young berry runners, according to La Trinidad Mayor Romeo Salda.

Strawberry production normally takes place from December to April. At the onset of the rainy season, most farmers shift to alternative crops, such as lettuce and beans, Salda said.

La Trinidad has 64 hectares of farms planted to strawberries, most of which are in the villages of Pico, Betag and Puguis.

But farmers growing chayote, potato and cabbage suffered the most. Swept by strong winds, these crops were the first to crumble when rains flooded gardens, said Lolita Bentres, provincial agriculturist. 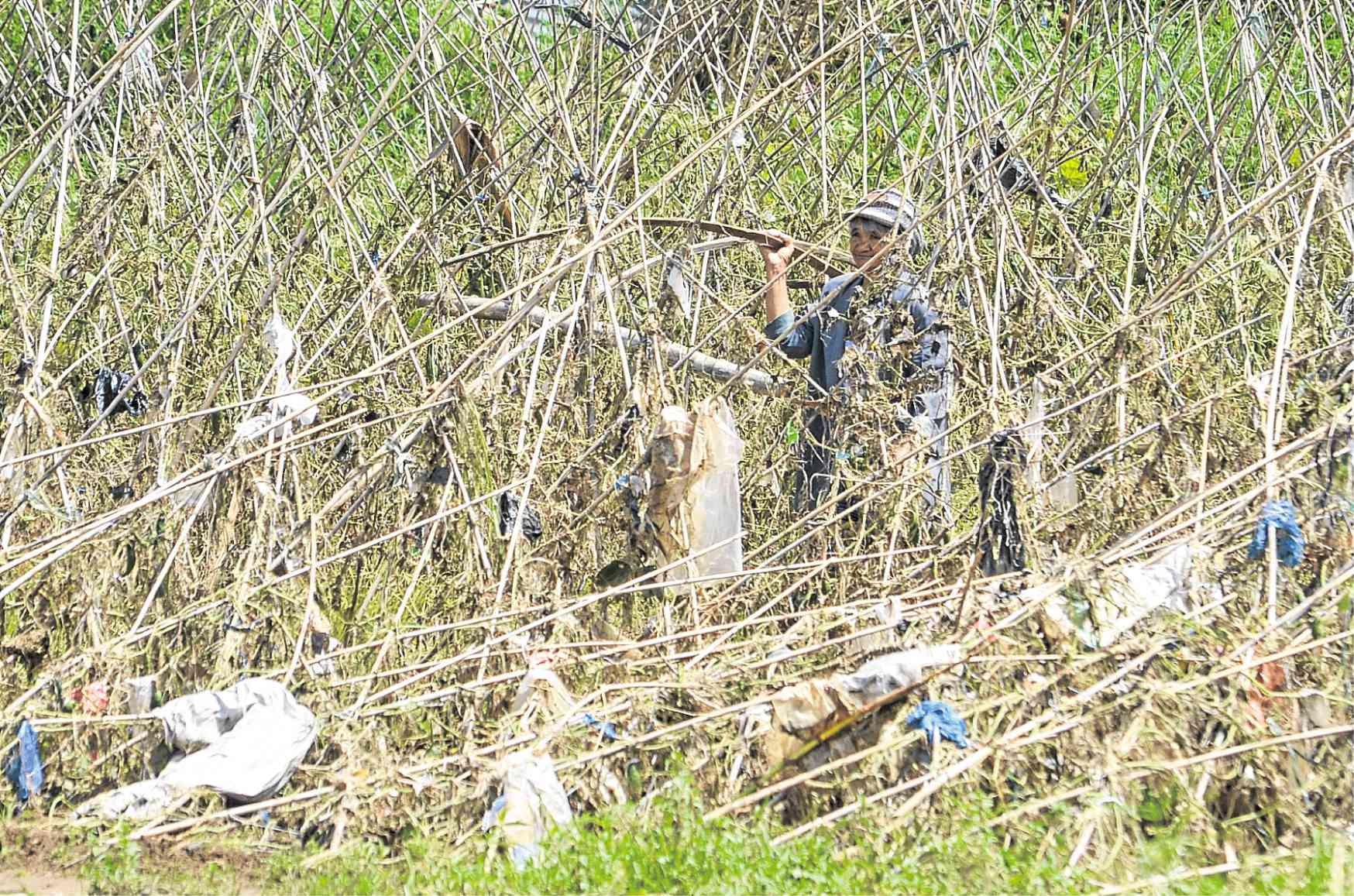 BEANPOLE Poles where green beans used to cling before the typhoon struck are gathered by a vegetable farmer in La Trinidad, Benguet, so these can be reused. —KARLSTON LAPNITEN

Bentres said the increase was caused by the delay in delivering supplies meant for markets in Metro Manila due to damaged roads.

In Buguias town, trucks and other vehicles were blocked by a 150-meter erosion at Kilometer 73 of Halsema Highway (Baguio-Bontoc Road) at Sitio Sinipsip in Barangay Amgaleyguey.

Farmers from Buguias and parts of Mountain Province had to take the much longer route through Kabayan town to reach the La Trinidad trading post.

Other farmers had been driving through Cervantes Road (Ilocos Sur province) to reach La Union province via Bessang Pass.

Bentres said vegetable prices would stabilize once the roads were opened to traffic.

“Not all farms are damaged. We have ample supply for the market, just delays in transport,” she said.

The immediate plan is to put up temporary bridges along eroded portions of Halsema Highway since rebuilding may take some time, Department of Public Works and Highways officials said.

Benguet had been placed under a state of calamity on Sept. 3 after the province posted P194.356 million worth of losses in infrastructure and agriculture following weeks of strong rains starting in July.

Bentres said her office was offering seedlings for farmers, although the provincial government had asked the Commission on Audit to allow it to convert the seedling to cash.

“Many farmers prefer cash because they are given the option which seedling to buy to restart planting. Others have seedlings already stored but need cash to cover losses,” she said.