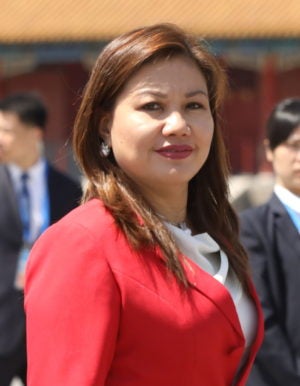 CITY OF MALOLOS — The disciplinarian streak displayed by President Rodrigo Duterte came from his mother, who raised him to heed and respect authority, the President’s partner, Cielito “Honeylet” Avanceña, said here on Monday.

The President’s strictness “comes from love,” she said in a speech to about 3,000 women after leading the inauguration of the renovated Bulacan provincial capitol.

Soledad Roa Duterte, the President’s mother, who died in 2012, was a teacher and an activist during martial law.

In several public speaking engagements, the President recounted how his mother disciplined him and beat him up if he did anything wrong.

Avanceña recounted stories relayed to her by Soledad about her mischievous son, Rodrigo, who was expelled from grade school after he hit a priest with a sling shot.

“His father, who was Davao governor, had died. Mr. Duterte was one of five children who needed to be raised properly by their mother,” Avanceña said. “She shaped them to accept discipline and righteousness.”

“Everywhere she went, she had to tag him along to make sure he did not do naughty things. She worried that the moment she turned her back, Rody would have done something bad,” she said, drawing laughter from the crowd.

She added: “The love our President shows us is the love he received from his parents. I am witness to how much he will do for this country.”

Supporting the President’s campaign against illegal drugs, Avanceña said a drug-free generation would benefit the country.

Addressing advocates of the “Invest Bulacan” program here, she said, “Our President wants to decongest Metro Manila and he wants development to be outside [Manila] and Bulacan is where the next development [would take place].”

Avanceña was accompanied here by the President’s special aide Christopher “Bong” Go, who later went to Tarlac City to administer the oath of office to 5,000 newly elected barangay officials at the Culipat gymnasium there.

Go said he was seeking the support of new village officials for the President’s war on drugs and his fight to eradicate crime and corruption. —Carmela Reyes-Estrope and Maria Adelaida Calayag