Some 20 members of the group called “The Silent Majority” protested outside the Senate on Tuesday, calling on lawmakers to defend the Constitution by proceeding with the impeachment trial of ousted Chief Justice Maria Lourdes Sereno.

The House of Representatives’ committee on justice has already approved the articles of impeachment against Sereno but these have yet to be adopted in the plenary before being transmitted to the Senate for trial.

Sereno was ousted last Friday when the Supreme Court, voting 8-6 granted the quo warranto petition against her. 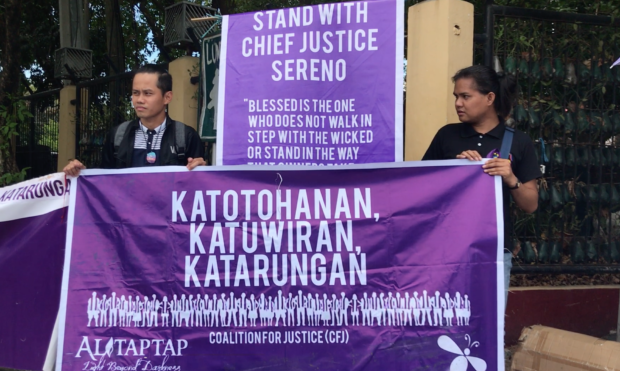 Members of the group called “The Silent Majority” held a protest rally outside the Senate on Tuesday, calling on senators to defend the Constitution by proceeding with the impeachment trial of Chief Justice Maria Lourdes Sereno. INQUIRER.NET PHOTO/CATHY MIRANDA

Tess Bonganay, member of the Silent Majority, labeled the tribunal’s decision as “unconstitutional” and “illegal.”

Many senators, she said, also did not agree with the SC’s ruling.

Bonganay lamented that Corona was given five months to defend himself in the impeachment proceedings of Congress while Sereno was being ousted through the quo warranto petition.

Sereno has yet to appeal the SC’s decision. /vvp