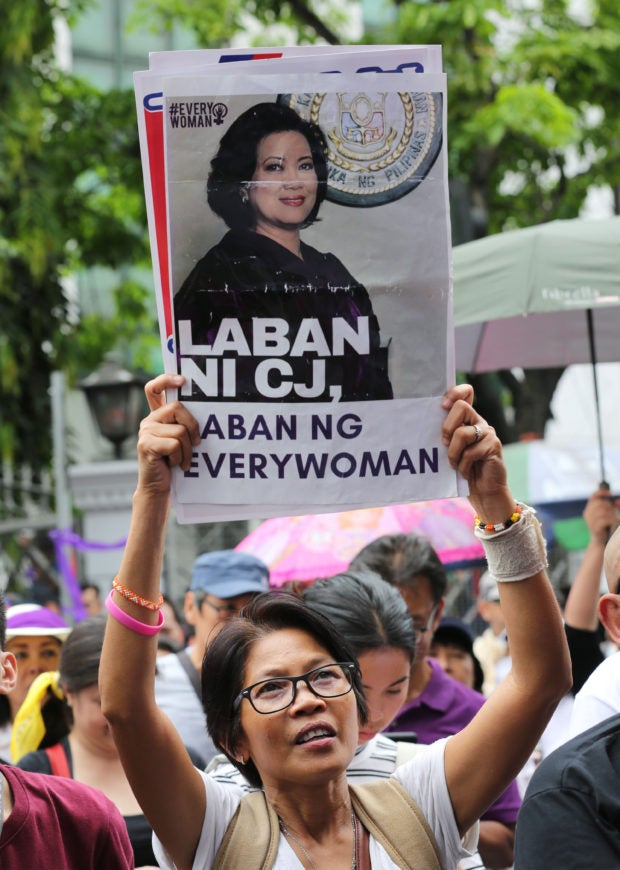 ‘#EVERYWOMAN’ A Sereno supporter awaits the historic ruling outside the Supreme Court on Friday. —JOAN BONDOC

Maria Lourdes Sereno, who landed in President Duterte’s crosshairs for defending judges included in his “narcolist,” was booted out on Friday as the country’s 24th Chief Justice by her own colleagues in the Supreme Court.

In a close vote that altered the country’s judicial landscape, the magistrates granted the quo warranto petition brought against Sereno by Solicitor General Jose Calida, ruling that constitutional officers like them could be unseated through other means besides the impeachment process as stated in the 1987 Constitution.

Sereno is the second Chief Justice in a row to be ousted. Senators convicted her predecessor, Renato Corona, who was impeached for not fully disclosing his wealth.

Sereno’s ouster came barely a month after Mr. Duterte publicly declared himself her “enemy” and vowed to drive her out of the high tribunal.

The justices issued the landmark ruling just two months after Calida, the state’s primary lawyer, initiated the quo warranto proceedings for Sereno’s failure to submit all the required financial documents when she applied for the top judicial post in 2012.

Te told reporters the justices voted 8-6 in approving the quo warranto petition, which Calida filed on March 5 after suspended lawyer Eligio Mallari requested him to go after Sereno.

“Sereno is found disqualified from and is hereby adjudged guilty of unlawfully holding and exercising the Office of the Chief Justice,” Te said, quoting the majority decision penned by Associate Justice Noel Tijam.

“Accordingly, respondent … Sereno is ousted and excluded therefrom. The position of the Chief Justice is declared vacant and the Judicial and Bar Council (JBC) is directed to commence the application and nomination process,” the decision said.

The ousted Chief Justice was also directed to explain why she should not be held liable for flouting the Code of Professional Responsibility and the Code of Judicial Conduct “for transgressing the sub judice rule and for casting aspersions and ill motives to the members of the Supreme Court.”

The justices said the decision should be implemented immediately.

Tijam, Martires, Reyes and Gesmundo were appointees of Mr. Duterte.

De Castro, Peralta and Bersamin were appointed by then President Gloria Macapagal-Arroyo, a close political ally of Mr. Duterte.

Tijam, De Castro, Bersamin, Martires, Peralta and Jardeleza ignored Sereno’s appeal for them not to take part in the deliberations because of their supposed bias against her. Except for Martires, the five others had testified against her in the impeachment hearings in the House of Representatives.

De Castro, said to be Sereno’s arch-nemesis in the Supreme Court, had previously admitted that she was disappointed by Sereno’s appointment as Chief Justice since the then 52-year-old associate justice was the most junior member of the court.

In his dissenting opinion, Leonen said Calida’s petition “does not deserve space in judicial deliberation within our constitutional democratic space” and the majority decision made the court “subservient to an aggressive Solicitor General.”

“Even if the Chief Justice has failed our expectations, quo warranto, as a process to oust an impeachable officer and a sitting member of the Supreme Court, is a legal abomination,” Leonen said

Voting 9-5 on the second issue, Te said the justices said Calida was correct in filing the quo warranto petition in seeking Sereno’s removal from the high court.

On the third issue, Te said nine justices—Carpio, De Castro, Peralta, Bersamin, Jardeleza, Martires, Tijam, Reyes and Gesmundo—ruled that Sereno violated the Constitution for not submitting all her statements of assets, liabilities and net worth to the JBC.

Two court insiders, who agreed to talk on condition of anonymity, said the atmosphere was tense inside the room where the magistrates held the 10 a.m. special full-court session.

“It was tense and awkward,” said one of the sources, describing Sereno’s first personal interaction with her colleagues since they forced her to take an indefinite leave on Feb. 28.

“Despite their differences, the justices tried to be civil with her,” the second source said.

The first source said Sereno was not able to preside, as her spokespersons said she would, over the 40-minute deliberations when Tijam questioned why she ended her indefinite leave without the authority from the tribunal.

Tijam, the source added, also moved to discard the seven other judicial matters on the agenda and just tackle the quo warranto case.

“The rest of the justices agreed. Then Carpio, being the most senior member, asked Sereno to leave the room,” the insider said. “She obliged without saying a word.”

The source said Tijam also asked Sereno why her spokespersons told the media that she did not need to ask permission from her colleagues before returning to work.

“In fairness to her, Sereno apologized for that,” the source said. “Justice Tijam felt that her spokespersons disrespected them when they said she did not have to ask the justices for authority before she went back from her leave.”

The source said several justices arrived early at the Supreme Court compound aboard bulletproof vehicles, which they “rented or borrowed from their friends.”

“They were worried about their safety. Some of them were also anxious that Sereno’s supporters might assault their houses,” the source said.

Sereno first caught the ire of Mr. Duterte just months after he took office in June 2016 when she invoked judicial powers over erring members of the judiciary and directed judges on the President’s so-called narcolist not to yield to authorities without a warrant of arrest.

She also voted with the court minority against at least two key moves by the President—the extension of martial law in Mindanao to deal with threats from Islamic State militants and the burial of dictator Ferdinand Marcos at Libingan ng mga Bayani. —WITH REPORTS FROM AFP, AP