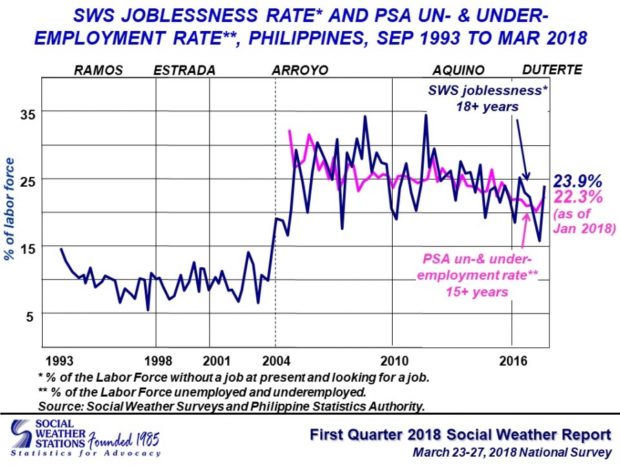 The survey result, released on Tuesday, Labor Day, showed that from 7.2 million in December 2017, the number of jobless adults rose to an estimated 10.9 million in March 2018. This 23.9 percent joblessness rate is an 8.2 percent increase from last year’s 15.7 percent.

The SWS noted that this was the second-highest mark under the current administration since the 25.1 percent recorded in December 2016.

Although the joblessness rate in the National Capital Region (NCR) went down by 0.5 percent, the nationwide figures rose because of a 12.1 percent spike in Balance Luzon, 6.3 percent in Visayas, and 7.6 percent in Mindanao

According to the survey conducted from March 23 to 27, unemployment in all areas rose from 17.2 percent to 22.8 percent in urban areas, and from 14.6 percent to 24.8 percent in rural areas.

SWS said that the data on jobless adults consist of those who left their old jobs (12.6 percent); those who were retrenched (7.7 percent); and first-time job seekers (3.5 percent)

The survey was conducted from March 23 to 27 among 1,200 respondents nationwide. It had sampling error margins of ±3% for national percentages, and ±6% each for Metro Manila, Balance Luzon, Visayas, and Mindanao.

The survey results showed that joblessness tend to affect women more than men, with 33.9 percent of female Filipinos jobless, compared to only 16.1 percent of males. The number of jobless females increased by 7.2 percent, while jobless males rose by 8.5 percent.

Net optimism regarding job availability also decreased among Filipinos from +41 in December 2017 to +37 in March 2018. Forty-nine percent of the respondents anticipate more jobs, 25 percent do not expect changes, 12 percent perceive fewer jobs and 14 percent have no idea./ee