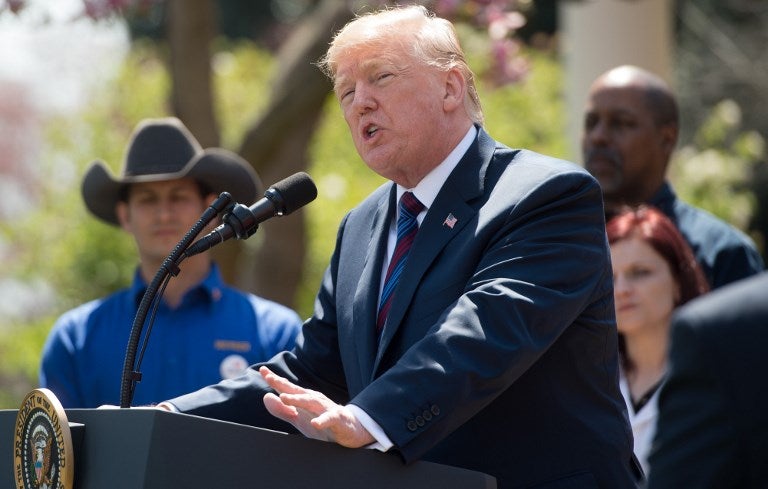 US President Donald Trump speaks about tax cuts during an event with American workers in the Rose Garden of the White House in Washington, DC, April 12, 2018. / AFP PHOTO / SAUL LOEB

President Donald Trump has directed senior aides to explore re-joining the 11-nation Trans-Pacific Partnership if a “better deal” can be reached, the White House said Thursday.

The decision, which was welcomed by lawmakers from agricultural states, could mark an abrupt about-face for a president who had campaigned against the deal and swiftly withdrew from it after taking office last year.

But the White House was quick to point out that Trump’s decision, rather than a flip-flop, was consistent with earlier statements.

“Last year, the President kept his promise to end the TPP deal… because it was unfair to American workers and farmers,” Deputy White House Press Secretary Lindsay Walters said in a statement.

However, he “has consistently said he would be open to a substantially better deal, including in his speech in Davos earlier this year.”

To that end, he has asked US Trade Representative Robert Lighthizer and top economic adviser Larry Kudlow “to take another look at whether or not a better deal could be negotiated,” she said.

His most hawkish trade advisers, who now dominate his cabinet after high-level departures, have expressed a strong preference for negotiating bilateral agreements, which they say play to US advantages.

But at the World Economic Forum in January, a gathering of the foremost proponents of global trade liberalization, Trump had said he was prepared to enter talks with the TPP countries “either individually or perhaps as a group.”

Thursday’s decision on the trade pact, which was negotiated under former president Barack Obama, was a further sign Trump’s positions may not be as tough as his rhetoric.

After taking office, Trump decided not to withdraw from NAFTA and from a free trade pact with South Korea, despite his threats to do so, preferring to renegotiate those deals. He also has so far exempted the largest US trading partners from his harshest new tariffs on steel and aluminum.

It remained unclear, however, how enthusiastically the other 11 TPP economies would welcome an American return to the bargaining table.

The TPP members, including Canada, Mexico and Japan, proceeded without the United States after Trump pulled out, and signed the sweeping new agreement last month, signaling that Washington risked missing the boat.

The Washington Post reported that Trump had made the sudden decision to reconsider TPP during a meeting with legislators and state governors on trade.

Some said joining the trade pact could strengthen the US position in the current trade spat with China, which is not a party to the agreement.

Critics said exiting the agreement had been a strategic gift to China, which stood to strengthen its trade dominance in the region as the United States retreated.

Farm groups and political leaders from US agricultural states have been most outspoken in denouncing Trump’s trade confrontations with Europe and China, which until recently appeared ready to boil over into all-out trade war.

Senator Deb Fischer, a Republican from the corn-growing state of Nebraska, said in a statement Thursday she was “encouraged” by Trump’s move “to reengage with TPP nations.”

TPP opponents, however, were quick to warn Trump risked of backsliding on a central tenet of the economic nationalism which helped sweep him to power.

But for the rest of the country “it would signal that Trump does not give a crap about working people and cannot be trusted on anything.”

Richard Trumka, head of the AFL-CIO, the largest federation of US trade unions, said on Twitter that the TPP would have failed America’s workers and “should remain dead.”

“There is no conceivable way to revive it without totally betraying working people,” he said.

Read Next
‘Billboard suitor’ jailed over bouncing checks
EDITORS' PICK
Nestlé Philippines’ ‘NESCAFÉ Plan’ bags Grand Anvil at PRSP 56th Anvil Awards
Smart reinforces superiority with best speed and mobile video experience in PH
Every Filipino home can now be a smart home with realme TechLife
New 3,045 COVID-19 cases push PH total active cases to 40,074
LTO’s P500-M deal for screws draws scrutiny
How to lose a PH genius: Wesley So officially a US citizen
MOST READ
How to lose a Filipino genius: Wesley So officially a US citizen
US lays out list of aid to ‘satisfy’ Duterte following VFA payment demand
Robredo on Sara Duterte leading poll surveys: Why are Filipinos drawn to leadership of this kind?
Rights lawyer survives attack by playing dead, loses all case files
Don't miss out on the latest news and information.