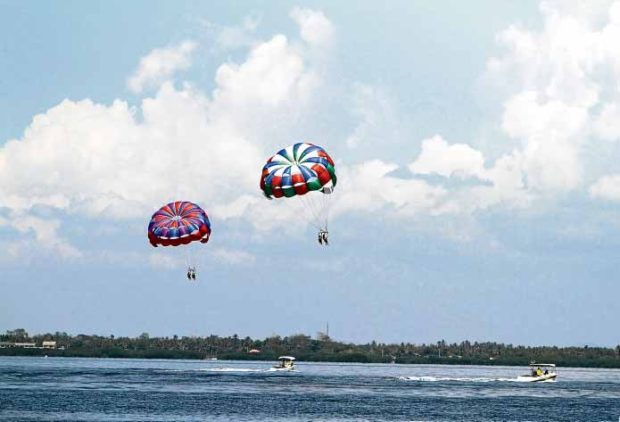 CEBU CITY—Swimming is unsafe in the waters off Mactan Island in Cebu province, and Panglao Island in Bohol province—two of the top tourist destinations in the Visayas—as fecal coliform levels found in seawater exceed the standard set by the Environmental Management Bureau (EMB).

William Cuñado, director of the EMB in Central Visayas, said the bureau’s recent study found that fecal coliform reached 150 to 200 most probable number (MPN) in Panglao and 180 to 250 MPN in Mactan.

The figures exceed the acceptable concentration of 100 MPN per 100 milliliters, which is considered safe for swimming and water sports.

Levels above tolerable standards may lead to illnesses after contact with or ingestion of water.

The contamination may be due to poor or noncompliance with proper wastewater treatment and sewage disposal systems by hotels and resorts that have proliferated in Mactan and Panglao, Cuñado said.

He said more than 300 hotels and resorts in Panglao, crown jewel of Bohol’s tourism, had been issued notices of violation of the Clean Water Act (Republic Act No. 9275).

Notices of violation were sent out to 37 hotels and resorts in Mactan, he added.

Mactan and Panglao join Boracay as among the islands that have been found to have coliform levels unsafe for swimming.

The dumping of sewage into the sea has resulted in regular algal blooms in Boracay, which President Duterte has called a “cesspool.”

The government is closing down Boracay for up to six months starting April 26 so it can be rehabilitated.

“On Panglao Island, we will be conducting a forum … on wastewater-treatment facilities for locators in the area to enlighten them about their importance,” Cuñado said.

He said the EMB was also reconciling reports on compliance from the Central Visayas regional offices of the DENR-7, Department of Tourism and local government units (LGUs) before taking action.

Gilbert Gonzales, the DENR regional director, said his office had completed an inventory of the compliance or noncompliance by resorts and hotels in Panglao on shoreline easement, forestland encroachment and intrusion in wetlands.

The inventory in Mactan has not been completed.

Some of the establishments that violated the 20-meter easement zone have been issued notices and asked to attend technical conferences to correct the deficiencies.

“After this, we will now demolish structures within the easement zone that we’ve established. Then after the demolition, we will require all establishments to apply the foreshore lease permits and comply with other requirements,” Gonzales said.

Based on the assessments by two teams that inspected the resorts and hotels in Panglao and Mactan, there is no need to close down violators but regular monitoring should be pushed to ensure compliance, he said.

The DENR earlier identified the lack of sewage treatment facilities and “bottomless” septic tanks as contributors to environmental problems in Panglao.

Up to 90 percent of the resorts in Panglao have no wastewater facilities, Panglao Councilor Rogelyn Clemeña-Degoma earlier said.

The Hotels, Resorts and Restaurants Association of Cebu (HRRAC) urged members to cooperate with LGUs and government agencies that were trying to correct environmental violations on Mactan Island.

Mayor Paz Radaza of Lapu-Lapu City said on Wednesday that warnings had been sent to several establishments without a sewage discharge permit. —WITH A REPORT FROM JOSE SANTINO BUNACHITA