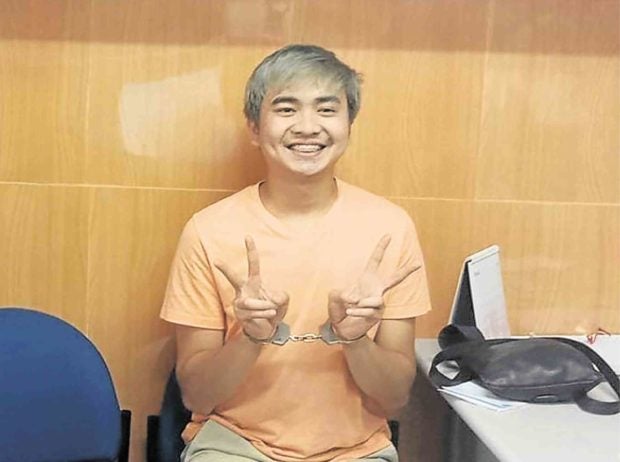 Christian Gaza: “I want to get out and start a new life.” —Photo courtesy of Malabon police

A self-proclaimed “CEO” who tried to pull off a media stunt last year by asking an actress out on a date via a street billboard is back in the news—this time as a police station detainee.

Christian “Xian” Gaza surrendered to Malabon City police after two courts ordered him arrested for alleged violation of the antibouncing checks law in connection with a P3-million investment scam.

Gaza, 24, generated some social media buzz in 2017 when he bought outdoor ad space to publicly ask actress Erich Gonzales out for coffee. He arrived at the police station on Thursday in a cheery mood, even posing for photos with some officers and kibitzers.

He was ordered arrested by Branches 120 and 56 of the Malabon Metropolitan Trial Court in August 2017 and on Feb. 27 this year, respectively, in connection with the cases filed by Melissa Cruz and Jaime Asuncion.

After he drew attention with his billboard gimmick, Gaza’s business ventures were called into question after people he had approached as potential “investors” called him out for not paying his debts.

In a phone interview, Asuncion said he had loaned Gaza a total of P1 million after the latter approached him for help in setting up a coffee shop.

Gaza then issued checks as payment, but Asuncion said they started to bounce by the time the balance stood at about P600,000.

Asuncion said Gaza then “disappeared” and could not be contacted about the checks but remained active on social media.

Before his surrender, Gaza even posted mug shots of himself on Facebook after being “arrested” by agents of the National Bureau of Investigation and the Interpol.

Speaking to reporters on Thursday, he said those photos were just an “April Fools’ joke.”

Gaza, who surrendered without a lawyer, called on his “friends and supporters” to help him post bail totaling P126,000.

“I want to get out and start a new life. I made a mistake. I became a scammer. I became a fraud. I really want to change,” he said.