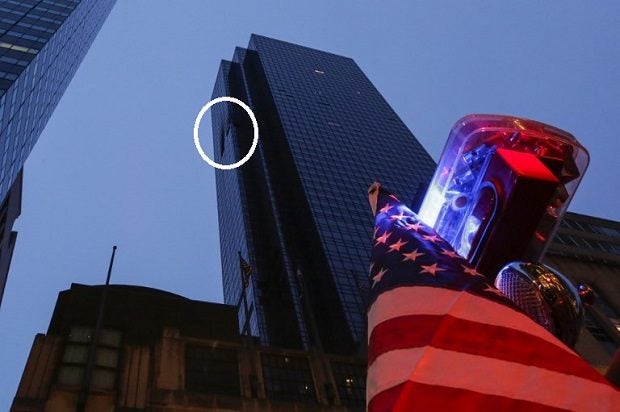 Broken and burned windows are seen after a fire broke out on the 50th floor of Trump Tower on April 7, 2018, in New York City. One person has reportedly died and four firefighters were injured in the four-alarm blaze. AFP

NEW YORK, United States — A fire erupted on the 50th floor of Trump Tower in New York late Saturday, the fire department said, adding there were no immediate reports of injuries.

Smoke rose from the skyscraper in Midtown Manhattan around 6 pm (2200 GMT) but later subsided.

Streets surrounding the building owned by US President Donald Trump that serves as the headquarters for The Trump Organization and houses a penthouse, were closed off.

The New York City Fire Department tweeted a picture of the building showing flames but the blaze appeared to have been contained as firefighters made their way into the building.

Trump himself said the blaze had been extinguished.

“Fire at Trump Tower is out. Very confined (well built building). Firemen (and women) did a great job. THANK YOU!” he wrote on Twitter. /cbb