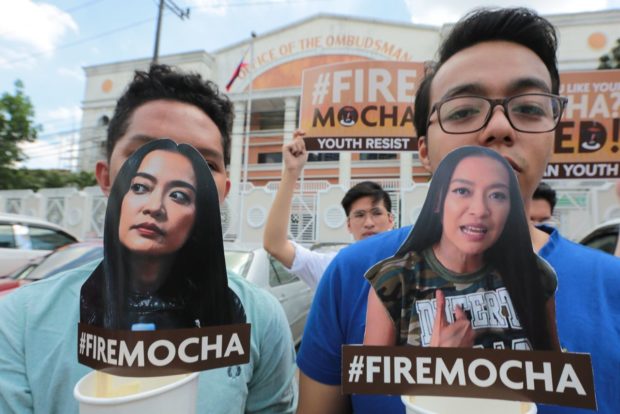 FIRE MOCHA. Members of the Akbayan Youth  hold a protest at the Office of the Ombudsman in Quezon City on Monday, April 2, 2018, as the group files a complaint against PCOO Asst. Sec. Mocha Uson for spreading fake news. The organization asks for Uson’s “removal from office and dismissal from service” over grave misconduct, serious dishonesty, and conduct prejudicial to the best interest of public service. They say Uson has been a “source of numerous and deliberate misinformation.”  (Philippine Daily Inquirer/Grig C. Montegrande)

Youth and student leaders filed on Monday an administrative complaint against Presidential Communications Assistant Secretary Esther Margaux “Mocha” Uson for allegedly using her position to proliferate “fake news” and silence the critics of the government.

In the 10-page complaint filed before the Office of the Ombudsman, Akbayan Youth sought for Uson’s “removal from office and dismissal from service” over grave misconduct, serious dishonesty, and conduct prejudicial to the best interest of public service.

“Asec. Mocha is one of the biggest purveyors of disinformation in this government. We are drawing the line versus Mocha and all other government officials who lie to the public,” said Shahmah Bulangis, co-convenor of Youth Resist, which is part of Akbayan Youth.

Before the filing, youth and student leaders carried protest signs and coffee cups with faces of Uson with the call #FireMocha.

“Public service is no joke. Our taxes are wasted on public officials whose only jobs are to lie to the Filipino people,” said Bas Claudio, secretary general of Akbayan Youth UP Diliman.

Despite being appointed by President Rodrigo Duterte as a Presidential Communications Operations Office (PCOO) assistant secretary on May 8, 2017, Uson maintains a public and open blog called “Mocha Uson Blog.”

She also has a radio/television segment in radio station DZRH.

Akbayan Youth members said her online and public persona have been a “source of numerous and deliberate misinformation.”

This, the group said, is contrary to the mandate of the PCOO to “ensure transparency and full and appropriate disclosure of policies, programs, official activities, and achievements of the Office of the President and the Executive Branch which are of public concern, and to inform and communicate the same to the Filipino people.”

The group also accused Uson of being a threat to the security of people who express their criticisms against the government, citing an instance when she made “public arbitrary ascertainment of facts which resulted to cyberbullying attacks against students who were in their right to peacefully protest.”

They cited that in November 2016, Uson posted a blog, purveying “false accusations” and “misinformation” that students of St. Scholastica’s College were required to attend a protest rally.

The youth organization also asserted that Uson is “not competent to discharge her functions as a public officer,” and commits “gross dishonesty by deliberately using misleading statements.”

The group said Uson’s blog posts citing non-existent “Article 263 of the Philippine Constitution,” and her video blog where she erroneously said Mayon volcano was in Naga City, have caused “misinformation and confusion to Filipinos.”

The Assistant Secretary, they said, also dared some opposition officials to visit the wake of a slain law enforcement officer even though the officer had already died more than a year before Uson made her demand.

The group also cited that in May 2017, Uson referred to and used a photograph of Honduran military forces on a post referring to Philippine military forces.

Moreover, Akbayan Youth pointed out Uson “uses her powers for the improper purpose of stifling dissenting officials from the opposition, an action which is contrary to the Constitution.”

According to the group, Uson clearly demonstrated this when she alleged that opposition Senator Antonio Trillanes IV has offshore bank accounts, and when she called Vice President Leni Robredo “bobo” during a radio program.

Shortly after the filing of the complaint, Senior Deputy Executive Secretary Menardo Guevarra defended Uson, saying he believes she is not a purveyor of misinformation.

READ: Mocha is no spreader of fake news, ‘I’ll take her word for it’ – Palace official

Read Next
7 killed, 811 arrested in PNP’s Holy Week anti-drug ops nationwide
EDITORS' PICK
97% of COVID-19 beds at PGH currently occupied
Gear up and get ready to play with Yamaha Mio Gear
Acer starts the year off strong with the Aspire Vero National Geographic Edition
Japan brings back virus restrictions over Omicron surge
Over 3 Million worth of prizes to be won at Smart Padala’s SENDali Manalo Promo!
Uproar over no vax, no ride policy: Maybe it’s time for gov’t to say sorry—Bello
MOST READ
1Sambayan names 7 aspirants in its 2022 Senate lineup
Emma Stone calls Andrew Garfield a ‘jerk’ after he ‘lied’ about his ‘Spider-Man: No Way Home’ appearance
Guevarra to Acosta: Obey rules on unvaccinated
PH to import 60,000 tons of fish to cover shortage
Don't miss out on the latest news and information.