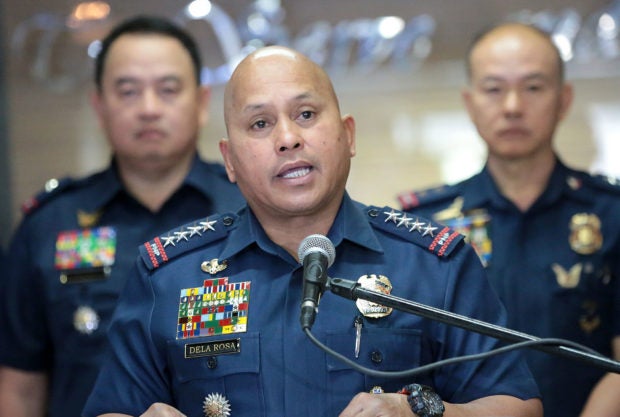 “There was no letup in our anti-drug operations during the Lenten Season,” De la Rosa said in a press conference.

He noted that the PNP conducted 505 anti-illegal drugs operations nationwide from Holy Wednesday to Easter Sunday or March 28 to April 1.

Of the seven people killed, four were from Region 3; and one each from Region 4-A, Region 12, and the Autonomous Region in Muslim Mindanao (ARMM), the PNP chief said.

But De la Rosa did not mention the circumstances that led to the killing of the seven drug suspects.

Often, however, police would say that drug suspects were killed as they fought back law enforcers during anti-drug operations.

De la Rosa also said there were no Tokhang operations during the Holy Week in keeping with the PNP’s commitment that its house-to-house visits to drug suspects would only be conducted during office hours starting last January.

The so-called war on drugs is being subjected to a preliminary investigation by the International Criminal Court (ICC) for alleged crimes against humanity committed by Mr. Duterte for supposedly directing police to carry out the ruthless campaign that purportedly victimized mostly the poor.

Earlier this year, the PNP reported that 65 drug suspects were killed from December 5, 2017 to February 14 after Duterte ordered the police back at the helm of the government’s anti-drug drive. Duterte briefly tasked the Philippine Drug Enforcement Agency (PDEA) to lead the campaign.

Also during Monday’s press conference, the PNP highlighted the social reintegration program for the drug surrenderers with De la Rosa receiving P1.5 million worth of donations in cash and livelihood starter tools.

To benefit from these donations were the community-based reformation centers initiated by the PNP and supported by the local government units, and other volunteers.

The other P500,000 came from proceeds of the 1st Chief PNP Run “Takbo Kontra Droga,” which was initiated by the Police Community Relations Group in partnership with Run Manila and other non-government organizations (NGOs).

The livelihood starter tools worth another P500,000 were donated by 7-11 convenience stores, the Public Safety Mutual Benefit Funds, Inc. (PSMBFI), Globe Telecom, Police Cavalier Association, Inc. (PCAI), and 37 other different NGOs affiliated with the Association of Chiefs of Police of the Philippines, Inc. /kga