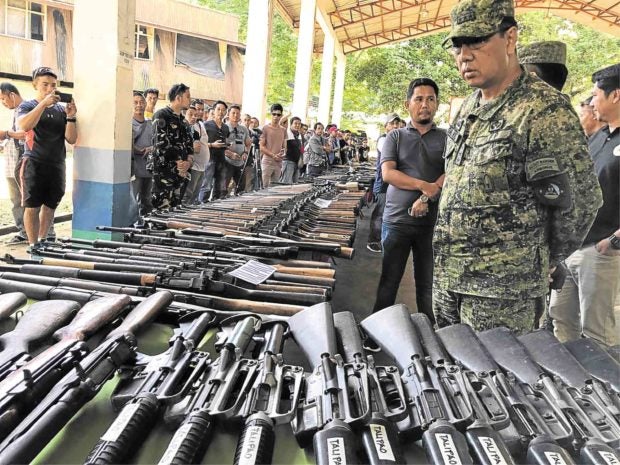 FIREPOWER Local and military officials in Mindanao say the declaration of martial law on the island has boosted the government’s campaign against unlicensed firearms. Several mayors in Sulu on Tuesday turned over their guns to authorities. —JULIE ALIPALA

JOLO, Sulu — “It’s like my wife had left me,” said Datu Al Anzar Julkarnain, as he handed over more than 20 assorted firearms to the military here on Tuesday.

Julkarnain, 35, village chair of Umangay in Patikul town, was among dozens of local government officials and residents who had decided to part with one of their prized possessions.

“We are doing a great sacrifice here. It’s like seeing my wife leaving me. For us Tausug, no one is complete without a firearm; having a gun is like having a wife,” he told the Inquirer.

Julkarnain said he had to think hard before surrendering his firearms.

What he feared the most, he said, was his enemies might take advantage of him unarmed.

“Rido” or clan wars erupt in different provinces in the Autonomous Region in Muslim Mindanao (ARMM), including Sulu.

In May 2017, three people were killed when a clan war broke out in Panamao town. In August 2015, members of two warring clans in Siasi town engaged in a firefight, killing eight people.

Julkarnain said he was also worried that village officials would be “incapacitated to run against drug pushers … because we do not have firearms.”

He, however, chose to trust government soldiers to protect local officials.

Like Julkarnain, Parang Mayor Madzfar Loong also surrendered 30 firearms that he and other town officials owned.

“As mayor of Parang, I take this move as one big sacrifice to better our place,” Loong said.

He believed that the surrender of firearms, especially those in the hands of civilians, would reduce, if not stop, the violence in the province.

“It was chance for us to voluntarily hand them over,” Tulawie said, adding that if they did not, authorities would eventually run after them.

Brig. Gen. Cirilito Sobejana, commander of the Joint Task Force Sulu, said 187 firearms were turned over by unlicensed gun holders in the province on Tuesday.

He said this was the offshoot of President Duterte’s appeal to local officials to help gather unlicensed firearms and turn them over to authorities.

Sobejana said the officials’ cooperation was a major step in achieving peace in the province. “This is a milestone towards a gun-free Sulu,” he said.

“They embrace their rifles as their wives, now they are changing their wives, they are embracing [a] new relationship towards peace and development and harmony to the people,” Galvez added.

“The increasing number of loose firearms [that had been surrendered] is the result of the intensified campaign of the [Armed Forces of the Philippines] amid the implementation of martial law in Mindanao,” said Brig. Gen. Diosdado Carreon, chief of the Army’s 601st Infantry Brigade.

ARMM Gov. Mujiv Hataman said the implementation of martial law added teeth to the campaign against loose firearms. —With a report from Charlie Señase

READ: Duterte’s 2nd weekly report on use of additional powers vs coronavirus