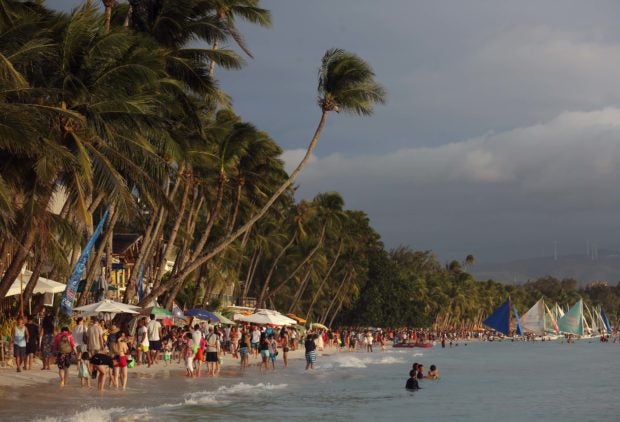 President Rodrigo Duterte said on Tuesday that he would declare a state of calamity in Boracay weeks after ordering a cleanup of the famous island in six months.

Duterte also cautioned courts not to interfere in the problem by issuing a temporary restraining order.

“I know it would work [inaudible]. And that is why I will be declaring state of calamity,” Duterte said in a speech during the oath-taking of Presidential Anti-Corruption Commission in Malacañang.

“And I would caution the courts not to interfere by issuing TRO because you would just exacerbate the situation. And the worst baka hindi kita paniwalaan,” he added.

Duterte said that the problem in Boracay is a public health and public safety issue, allowing him to issue such declaration.

“I can order for this thing to happen because it is public interest, public safety, and public health para malaman ninyo (for your information),” he said.

The President also ordered the local government unit of Boracay to cooperate with the national government and hasten the cleanup.

“For as long as there are shit coming out of those pipes draining to the sea, I will never give you the time of the day na bumalik diyan,” he said.

Last week, Interior Officer-in-Charge Secretary Eduardo Año said that the Department of Interior and Local Government (DILG) was considering the declaration of state of calamity over the tourist island and a 60-day shutdown of commercial establishments.

This after he ordered an investigation to look into the possible liability of local government officials over the “environmental degradation” of the world-famous beach.

The investigation, Año said, would probe local executives who issued building permits, occupancy permits and even business permits despite non-compliance with applicable laws and regulations.